IRW interns from the spring and summer cohorts researched police accountability, low-income housing and charities renting Mar-a-Lago for major fundraisers, which led to stories with our partners, The Washington Post, PBS FRONTLINE and The Chronicle of Philanthropy, respectively.

The latest Post story, in an ongoing series about police, required filing open-records requests with the country's largest police forces. Thirty-seven departments complied and disclosed firing 1,881 officers since 2006. Of those, 451 successfully appealed and won their jobs back. The stories examine how and why this happens even when the underlying conduct and charges are undisputed. 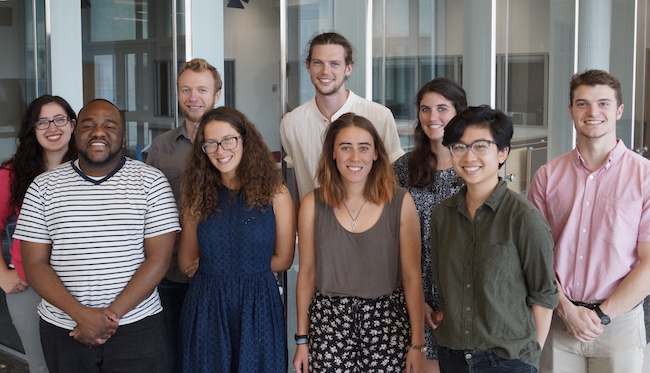 Graduate students in Workshop Senior Editor and Post reporter John Sullivan's practicum reported on the story over many months. Teaganne Finn, Josephine Peterson, Matt Hanan, Taylor Hartz, Jordan Houston and Shaun Courtney worked closely with Kimbriell Kelly at the Post and others on the investigative team to produce the final package.

FRONTLINE re-broadcast a 2013 co-production with the Workshop of "Hunting the Nightmare Bacteria" that included new reporting and filming from Houston about ongoing efforts to combat antibiotic-resistant bacteria. Workshop intern Sarah Robertson wrote an update on two of the survivors followed in the original film.

The Workshop also combined forces with reporters and editors at the Chronicle of Philanthropy to look at fundraisers held at Mar-a-Lago and examine how lucrative these major events can be. Workshop intern Clairissa Baker found that many continue to flock to this exclusive resort — even when President Trump's policies are at odds with their charities' missions. Faculty member Margot Susca, who worked as an associate editor at IRW this summer, helped analyze Baker's findings.

Also published this summer: Workshop intern Mandy McLaren's ongoing education coverage, including whether charter schools are widening the racial divide in Louisiana. And IRW graduate intern Reis Thebault wrote about ethics waivers in the administration; whether they can be retroactive; and why these laws and codes originated.

Summer students are finishing research this month on stories we'll publish in the fall with The Washington Post and in preparation for the next FRONTLINE collaboration. This year's team of students also included videographer and video editor Alex Sabatell and graphic designer Andrea Lin, both of whom created visuals to go with all the stories under way.

Opposition continues to challenge the election in Cambodia

Cambodian news organizations began to feel the pressure last fall as Prime Minister Hun Sen, in power for more than 30 years, began to dismantle, restrict or outlaw freedom of expression on air, in print and online in what has been described as the death-knell for democracy in Cambodia. In late July, Hun Sen won re-election by a landslide. But Monovithya Kem, daughter of the imprisoned opposition leader, says she is not giving up her opposition to Hun Sen.

Cambodian government continues to clamp down on press freedoms

Cambodian voters head to their local polling places to cast votes for prime minister on July 29. There are a dizzying number of parties to choose from; one report counted 20 so far — all part of a façade of a free and fair election.

What we're reading: recent investigations from across the country

The U.S. banking industry reported record profits of $56 billion in the first quarter of 2018, an increase of more than 27 percent over the same time last year, according to the Federal Deposit Insurance Corp.

We publish online and in print, teaming up with other news organizations. We recently aired "Blackout in Puerto Rico," a co-production of FRONTLINE, NPR and the Workshop. We also recently produced an IRW Interactive, "Nightmare Bacteria: Life Without Antibiotics," a compilation of several programs on antibiotic-resistance done with the FRONTLINE team based at the Workshop and the School of Communication.

Our graduate students are working as researchers and reporters with The Washington Post's investigative team. We recently published stories with the Post on Trump merchandise, police shootings and fired officers.

Over the years, we have teamed with msnbc and later NBC News online to produce our BankTracker series and stories on the economy. We also co-produced the first season of "Years of Living Dangerously," a documentary series and Emmy Award-winning program that aired on Showtime. Learn more on our partners page.

Profiles of notable journalists and their stories of key moments in U.S. history in the last 50 years can be found on the Investigating Power site. See Workshop Executive Editor Charles Lewis' latest video interviews as well as historic footage and timelines. You can also read more about the project and why we documented these groundbreaking examples of original, investigative journalism that helped shape or change public perceptions on key issues of our time, from civil rights to Iraq, here.