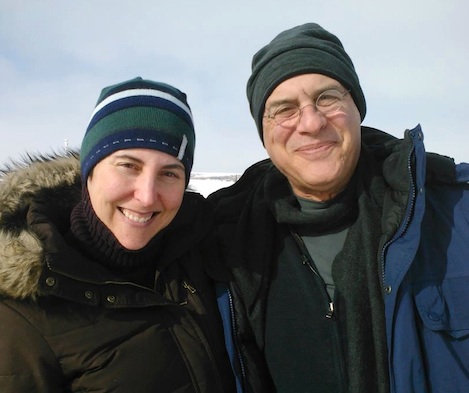 Ebrahim and Mark Bittman of The New York Times reporting from Colorado.

"Years of Living Dangerously," a new series about how climate change is altering the face of our planet and people's lives, will air at 10 p.m. on Sundays beginning April 13, on Showtime. You can preview the first episode starting today on the "Years" site.

More than two years ago, series creators and executive producers Joel Bach and David Gelber reached out to the Investigative Reporting Workshop’s Executive Editor Charles Lewis about getting involved in their production. At the time, the series was just a seed of an idea, but it had the backing of legendary moviemakers James Cameron and Jerry Weintraub as executive producers. We felt the opportunity to be involved in this production was too good to pass up. In fact, it was also a reunion of sorts for Bach, Gelber, Lewis and me as we had been producers at "CBS 60 Minutes" and "60 Minutes II."

I was one of the first producers to join the series and put together a small producing team: Jolie Lee, a graduate of the American University master's in Interactive Journalism program, was my associate producer, and Loren Stein, a veteran investigative reporter, was my researcher.

Over the next few months, the Workshop settled on two projects. The first examined the boom in natural-gas production and the Obama administration's shift in policy away from coal for electricity in favor of natural gas. This is in part because gas burns cleaner than coal by producing half the heat-trapping carbon-dioxide emissions. We looked into whether gas leaks directly into the atmosphere reduced or eliminated the climate benefits of switching from coal. Gas is mostly methane, a super-potent greenhouse gas over the short term.

The other story examined the boom in renewable energy in this country and the forces that were fighting to prevent or rollback meaningful action on climate change. We focused on a battle in several states over laws requiring utilities to use a certain amount of renewable energy for electricity. We spent time in Kansas, where the battle was fierce, following two people on opposite sides of the issue.

Both of these projects required substantial travel for reporting and production, including to Kansas, Colorado, Utah, Arkansas, California, North Carolina, Pennsylvania, New York, New Hampshire, Georgia and Washington, D.C.  At times, when we filmed on location, our crew topped 15 people — with cinematographers, sound men and women, gaffers, assistants, producers and correspondents. We had the pleasure of working with two correspondents: New York Times columnist and cookbook author Mark Bittman as well as actress and activist America Ferrera. Both brought different skills to the production as well as their keen intellects.

Working on this series was such a fabulous opportunity to conduct important journalism in a cinematic, documentary storytelling style, which was a little new for the Workshop. This project continued our track record of pushing investigative-reporting storytelling into new territory, in an effort to reach new audiences that might not go to a newspaper or digital platform to get their information. In this way, it is the Workshop’s hope that investigative and in-depth reporting continue to be accessible and relevant to all.