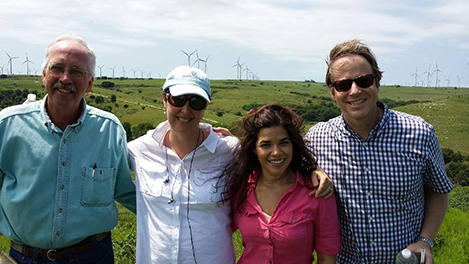 I’ve been on the road a lot these past 15 months as a producer for Showtime’s Years of Living Dangerously, a new series on the impact of climate change. I traveled to at least 10 states and met dozens of people living their lives on the front lines of climate change. During all that time, there was no one who made more of an impression on me than a cattle rancher named Pete Ferrell who lives in rural Kansas.

I learned about Ferrell more than a year ago when I was researching the fight over state laws that require utilities to use renewable energy, like wind and solar, as part of their electricity mix. These laws, which have been enacted in 30 states, are under attack from well-funded and organized conservative groups that don’t want any meaningful action on climate change and consider the laws a reprehensible government mandate.

Ferrell, who saw the promise of wind energy more than a decade ago, sees these clean-energy laws as a hopeful way to help transition the country from dirty fossil fuels that cause global warming to clean renewable energy that does not, he said.

I wanted to meet Ferrell and understand what was going on in Kansas, so Associate Producer Jolie Lee and I packed our bags and flew to Wichita. There we rented a car and drove 60 miles to the small town of Beaumont, where Ferrell lives. As we approached his ranch through the rolling hills of tall prairie grass, in the distance I saw giant windmills reaching into the sky. Although I know some people see wind turbines as a blight, to me they seemed to gently turn in the air and blend gracefully into the landscape, while producing clean energy that did not pollute the environment.

We drove through Beaumont, where turbines outnumber residents, and about a mile up the road, reached Ferrell’s 7,000-acre ranch, which has been in his family for four generations. Underneath the turbines, about 2,000 head of cattle grazed, about half the stock of past years, said Ferrell, thanks to the havoc wrought by a three-year drought. He’s had to start raising Bison and another heartier breed of cattle called Corriente, as they don’t need as much food and water as other breeds do.

Water is life on the ranch, said Ferrell, as he recalled the diary entry written by his grandfather in 1936: "They were in the depths of the Dust Bowl years, and his entry that day simply said, ‘Jack found water in the silo pasture today, thank God, we’re saved!’"

Ferrell’s great-grandfather, Lloyd Bascom Ferrell, was a telegraph operator who settled in Wichita. One hundred and twenty-five years ago, Lloyd saved up enough money to buy land for a ranch, and at age 70 he built the house where Ferrell lives today.

For Ferrell, the family land is sacred ground. Although his ancestors survived the Depression and the drought of the Dust Bowl years, Ferrell says he doesn’t know if he can survive climate change and still keep his home.

But unlike most of his fellow ranchers, Ferrell has been lucky enough to protect himself somewhat from the worst of climate change. In 1989, he visited one of the largest cattle ranches in the country in Hawaii, where he saw cattle grazing while surrounded by wind turbines. That's when the seed of an idea came to him. In 2005, a developer finished building the Elk River Wind Project, a 150-megawatt wind farm with 100 wind turbines — 50 of which are located on Ferrell's land. Thanks to this wind farm, Ferrell receives a percentage of the revenue generated by the turbines on his property.

“Wind is my best cash crop in a drought,” he says.  “Wind blows even in a drought.  I’m fortunate in that respect.”

Ferrell recently told me that in the wind farm's first year, his income was about one-third from wind and two-thirds from ranching.  Now, it’s about 50-50.  If the income from agriculture dried up completely because of drought, he could survive on the income from the wind farm, he says. “But I would need to bag groceries at a supermarket to eat,” he adds.

The National Renewable Energy Laboratory says Kansas’ wind resource could provide more than 90 times the state’s current electricity needs.  In 2009, Kansas passed a law requiring 20 percent of all electricity to be generated from renewable energy by 2020. Thanks to this law, today Kansas has enough wind turbines to power almost 900,000 homes.

Wind energy has also brought in billions in investment and more than 12,000 jobs. Landowners like Ferrell have benefited from substantial land lease payments to the tune of $13.7 million annually, while local communities have received about $10 million in contributions from wind developers per year.

But not everyone is happy with this scenario. Kansas is the home turf of Charles and Bill Koch of Koch Industries, the oil and chemical conglomerate. According to a study by Green Peace, the billionaires have poured more than $67 million into various foundations and conservative groups in order to fight any government action on climate change. For Koch Industries, a victory in their home state of Kansas would mean the repeal of the state's clean energy standard.

This year, the forces fighting against renewable energy in Kansas drew closer to victory.  A repeal bill passed the Senate, but was defeated in the House.

Ferrell testified before the Kansas legislature about the benefits of wind power. But that's not the only reason he's a climate change hero in my eyes. Every now and then, he brings busloads of eager youngsters to his ranch to learn about climate change and renewable energy on the prairie.  Over the years, Ferrell thinks he’s brought more than 500 kids to the ranch. I was fortunate enough to watch him in action last year when two big yellow school buses of elementary kids rolled up.

Ferrell climbed into a parked bus to greet a bunch of hot and tired kids. He then asked them a question:

“What would happen to the temperature on this bus if we raised the windows?”

A lot of hands went up. One eager child volunteered: “It would get hot.”

“That’s right,” Ferrell said. “What else? Why would it get hotter?”

He motioned at a girl waving her hand near the back of the bus. “Yes ma’am.”

“Because not as much air would be able to get in and there is a breeze outside.  If you close the windows, the air could not get in.”

“That’s right,” Ferrell said. "If we shut the windows, the hot air can’t get out. What happens if we burn a gallon of gasoline? It puts carbon in the air, and this has the same effect as closing the windows on the bus.”

Ferrell proceeded to let the kids get off the bus, and they ran in the tall prairie grass underneath the shade of the wind turbines.

Ferrell says that after this brutally cold and wet winter, he’s at “100 percent moisture” today.  But that could change in a heartbeat, he says.  “So, I am planning on drought because tomorrow could be my last rain.”