When James Taylor of the Heartland Institute decided to write a model bill to repeal state renewable energy standards in 2012, he had the ideal partner in the American Legislative Exchange Council, or ALEC. The libertarian Heartland think tank, best known for its work promoting the denial of climate science, is a member of ALEC’s Energy, Environment and Agriculture task force, which includes more than 100 predominantly Republican state legislators and many of the largest fossil fuel companies in the world, such as ExxonMobil, BP and Peabody Energy.

As these lawmakers made the case that government policies supporting clean, renewable energy were anti-free market and harmful to the state economy, they were supported by a robust national network of conservative think tanks, foundations and political advocacy groups, called the State Policy Network, which provides studies, experts, advocacy and talking points designed to advance the ALEC agenda. (Members include the Koch-backed Americans for Prosperity, Cato Institute and Heritage Institute, as well as the Charles Koch Foundation.)

Until a large cache of internal documents was obtained and released by the Center for Media and Democracy and Common Cause in 2011, not a lot was known about the inner workings of ALEC. The secretive group has been a force in American politics since 1973 but had carefully guarded its membership, funding, and legislative record — including its work targeting environmental protections and climate-change initiatives.

For more than two decades, ALEC has played a pivotal role in a well-funded, coordinated and often anonymous crusade to block climate initiatives at the state and federal level, says Lisa Graves, president of the nonprofit The Progressive Inc., which includes the Center for Media and Democracy (CMD). The CMD has published thousands of internal ALEC documents as well as 800 model bills on its website ALEC Exposed; more than 100 of the bills are environment or energy related.

“ALEC is the central hub in a constellation of right-wing front groups,” says Graves. “It’s the vehicle for mis-educating nearly 2,000 state legislators on climate change issues as well as those legislators who go on to serve in Congress and the Senate.”

Nationally, the ALEC network is powerful and active, says Graves — one reason why federal climate legislation, including cap-and-trade bills in 2009 and 2010, died in Congress. ALEC alumni include at least 14 sitting or former governors and 91 members of Congress, including House Speaker John Boehner, House Budget Committee Chairman Paul Ryan and House Majority Leader Eric Cantor, who snared an award from ALEC in 2009 for championing the group’s goals in Congress. 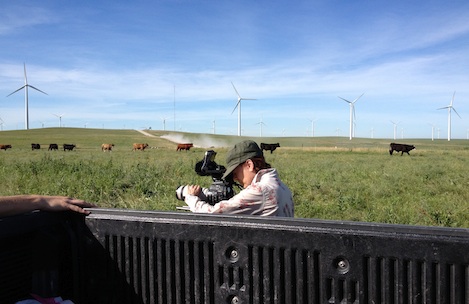 The "Years of Living Dangerously" crew films on the Ferrell ranch and wind farm in Kansas, a state where ALEC legislators sponsored or co-sponsored a version of the

to the state economy.

ALEC, which is organized as a Washington-based nonprofit, brings state legislators and representatives from corporations, trade groups, conservative foundations and think tanks together to draft and vote on model bills on a wide range of state and federal issues pressing a limited government, anti-regulation agenda. What sets ALEC apart from other national policy networking groups is that corporate lobbyists and state legislators are equal players; lobbyists’ and lawmakers’ votes on model bills are given the same weight within the organization. ALEC boasts that 200 of the 800 to 1,000 bills introduced each year by its legislative members become law.

The process essentially makes ALEC a shadow government, says Doug Clopp, the former deputy director for programs for Common Cause. “One-third of all elected officials are secret members of ALEC, with the world’s most powerful corporations bankrolling it and drafting model bills, and all behind closed doors,” he says. “It used to be that legislators needed to be responsive to their constituents. No longer. It’s a subversion of the Democratic process. And ALEC has built this with ruthless efficiency.”

In April 2012, Common Cause filed a complaint with the Internal Revenue Service seeking to strip ALEC of its tax-exempt status. The complaint argues that ALEC’s activity violates tax-code provisions that bar nonprofits from lobbying or influencing legislation.

Underwritten in part by coal, gas and oil companies — including ExxonMobil, Koch Industries, Chevron, BP, Shell, Duke Energy, the American Petroleum Institute and Peabody Energy, the largest private-sector coal company in the world — ALEC has made it a priority to prevent and overturn climate legislation, renewable energy and environmental protections that threaten the economic interests of the fossil-fuel industry.

According to a 2013 article by the Brookings Institution, ALEC bills targeting the environment were introduced in states more often than any other policy area (tied with immigration). Leaked confidential documents from 2011 obtained by Common Cause revealed that ALEC uses detailed spreadsheets to carefully track progress of its environmental and energy bills throughout the country.

Watchdog groups, however, are in the dark about such activities and must go to great lengths to track ALEC legislation, as there is no central public database. CMD and others must instead hand-research state legislation to trace its roots back to ALEC, as most of the bills are altered to meet state statutes and are rarely completely identical.

At least 77 ALEC-driven bills to undermine environmental laws, slow progress of clean energy and prevent climate-change initiatives were introduced in 34 states in 2013, according to CMD’s best estimates.

ALEC’s crusade against the regulation of greenhouse gases was in full swing as early as 1998, when the U.S. was debating the 1997 Kyoto Protocol. ALEC ratified a model resolution, which passed in 10 states, calling on the U.S. to reject joining the international climate treaty and banning states from regulating carbon emissions in any way. After ALEC ally George W. Bush entered the White House in 2001, the U.S. rejected the treaty.

Liddy Bourne also spearheaded an ALEC campaign in 2004 against those states that had started regulatory programs to reduce greenhouse gas emissions, which ALEC referred to as “Sons of Kyoto” legislation.

In 2010, after cap and trade bills failed to pass Congress, ALEC worked to derail the regional, market-based cap-and-trade programs in the Northwest, Midwest and West that altogether comprised 32 states. ALEC was quite successful: Gov. Chris Christie pulled New Jersey out of the Northeast Regional Greenhouse Gas Initiative, and the Western Climate Initiative lost nearly all of its member states.

At least 14 states have passed a 2011 ALEC resolution that asks Congress to compel the U.S. Environmental Protection Agency (EPA) to stop regulating carbon dioxide and greenhouse gases as a pollutant under the Clean Air Act. ALEC also launched a parallel campaign in 2010 called the “EPA’s Regulatory Trainwreck.”

ALEC’s move to rollback EPA regulations didn’t surprise Leon Billings, co-author of the 1970 Clean Air Act as well as several other landmark federal environmental laws. When Billings and his colleagues realized the vast influence that ALEC wielded in statehouses across the country, they founded the National Caucus of Environmental Legislators in 1996 to monitor ALEC and create a network of environmentally progressive legislators.

“We saw an epidemic had infected state legislatures, which had also turned sharply to the right,” says Billings. “ALEC and other like-minded organizations were engaged in an active propaganda war with legislators, and model laws were showing up in identical form across the country. It was little seedlings, little trees, and then we saw the whole forest out there.”

In 2012, ALEC passed a resolution to undermine The U.S. Mayors Climate Protection Agreement, which has more than 1,000 signatories. The resolution mandates that a report be filed on cities and states that fall short of their goals to reduce greenhouse gas emissions. The resolution goes on to demand that any program that has not met its goal be canceled and withdrawn from the agreement.

In 2013, an ALEC resolution urging Congress and the U.S. State Department to push through ALEC funder TransCanada’s Keystone XL tar sands pipeline was introduced in 10 states.

Although Taylor’s model bill to repeal state renewable energy standards was defeated around the country, by bipartisan majorities in some cases, ALEC is again targeting clean energy in 2014 with two new bills designed to weaken or dismantle state clean-energy programs. Twenty-nine states and the District of Columbia have laws requiring utilities to provide a certain percentage of their electricity from renewable sources, including wind and solar; the states with the most ambitious programs include California and Colorado.

Other bills currently in the ALEC pipeline would weaken solar net-metering policies; prevent the regulation of toxic coal ash; and create loopholes in disclosure requirements for chemicals used in hydraulic fracturing (fracking), some of which are known or suspected carcinogens. According to The New York Times, ExxonMobil sponsored the fracking bill.

In 2012, after news reports revealed that ALEC had also pushed Florida’s controversial “Stand Your Ground” gun law in the states, at least 60 corporations dropped their ALEC membership — including Coca-Cola, Wal-Mart and Amazon, according to CMD and The Guardian newspaper. Oil, and energy companies, however, have stood by ALEC.

“Political outcomes will affect (ALEC’s) influence the most,” says Billings. “But there’s a host of evidence that institutions that the Koch brothers fund stay around for a very long time. These guys are on a mission... There’s no reason to believe that ALEC will go away.”

We've recently updated this story with news from Ohio.