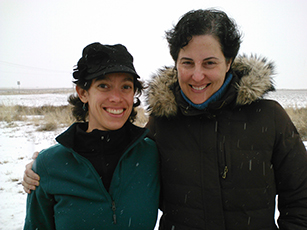 We face a climate change crisis today with potentially catastrophic consequences. Our addiction to fossil fuels has pushed carbon dioxide levels in the atmosphere to an all-time high, as global temperatures and sea levels rise at an alarming rate and drought in parts of the world have become more frequent and severe.  Part of the Obama administration’s plan to cut manmade carbon dioxide emissions, a powerful heat-trapping gas, is to nudge power plants through regulation to replace coal with natural gas. Although gas is still a fossil fuel, when it is burned, it produces 50 percent less carbon dioxide than coal.

“The natural gas boom has led to cleaner power and greater energy independence,” President Obama said in his 2013 State of the Union address.  “We need to encourage that.”

But here’s the tricky issue, which I discovered soon after I started researching this topic for Showtime’s climate-change series, “Years of Living Dangerously:” If natural gas, which is almost pure methane and a potent greenhouse gas in its own right, leaks into the air without being burned, it might be no better than coal from a climate perspective.  It might even be worse. That’s because methane is 70 to 100 times more potent than carbon dioxide over the short-term.  Many experts say we need to do something about human emissions of heat-trapping gases in the short-term, say the next 20 years, or else the window will close for us to change the planet’s trajectory.

About a year and a half ago, the conventional wisdom was that an insignificant amount of natural gas leaked from the vast gas infrastructure of wells, pipes, transmission and distribution lines across the country — certainly not enough to cancel out the climate benefits of switching from coal to gas. Industry interests were not the only ones saying this. Many environmental groups and academic researchers agreed.  Even the federal government’s top environmental cop, the Environmental Protection Agency (EPA), seemed to agree that methane leaks were not a huge problem.

But scratch the surface and I realized that nobody really knew how much gas was leaking because there just wasn’t enough independent research being conducted with actual methane-emission measurements.

The federal government essentially took the industry’s word that small amounts of gas were leaking out from the natural system; both the government and industry agreed that no more than 1.5 percent of all the natural gas produced was leaking across the entire gas infrastructure. This was important because if more than about 3 percent leaked from production to delivery of gas at a power plant, gas would be deemed no better than coal for the climate for some period of time, and the larger the leak rate, the longer the time period it would take for the climate benefits of gas to kick in, according to experts at the Environmental Defense Fund, a group that often works with industry to come up with solutions to environmental problems.

In 2012, two Cornell University professors caused a tsunami in the gas-is-clean(er) movement when they published a peer-reviewed paper in which they estimated that the percentage of gas being leaked was far higher — anywhere from 3.6 to 7.9 percent — than the industry or the EPA suggested, making it not such a clean choice over coal in terms of climate benefits.

The paper, “Methane and the greenhouse-gas footprint of natural gas from shale formations,” was criticized at the time as inaccurate, for, among other reasons, estimating a leak rate based on the available literature. The authors, Robert Howarth, Renee Santoro and Anthony Ingraffea, were considered anti-natural gas activists for raising the question:  Is gas really a cleaner source of energy if methane leaks were at a higher rate than assumed? Based on their research, the authors concluded no.

To me, the question these academics were asking was intriguing, especially given the Obama administration’s policy shift away from coal and toward gas, partly for climate reasons.

A few months after the Cornell paper was published, a government scientist at the National Oceanic and Atmospheric Administration (NOAA) was the lead author of another study, based this time on actual aerial measurements of how much gas was leaking in the Denver Basin.

“We estimated at the time that on average 4 percent of the gas that was extracted from the ground ended up in the atmosphere instead of in the pipeline,” said Gaby Petron, the NOAA scientist.

It was a snapshot of one basin, not the entire country, but it still caused quite a stir because she, too, found that gas leaks were more than assumed and within the range of what the Cornell authors estimated.

I decided I needed to see things for myself to understand better what was going on. So I traveled to Boulder, Colo., where NOAA offices are nestled at the foot of the Rocky Mountains, to talk with Petron.

On a sunny fall day, I met Petron, who spoke English peppered with a French accent. She wanted to show me what she was seeing in the gas fields. We climbed into a white van retrofitted with instruments to measure methane in the atmosphere. A flask hung off a pole on the van’s roof to take samples of air to study the chemical makeup of methane so Petron would know if the emissions were from oil and gas or cow burps, another big producer of methane. They also studied the air samples to see what other toxic chemicals were leaking from the gas system.

We spent the afternoon driving around wells, compressor stations, processing plants and above-ground transmission pipes. Sometimes the methane readings were high, and sometimes, they were normal.  Occasionally, the leaks were big, and other times they were small.

At the end of the day, as we drove back to Boulder, we passed a gas well on a two-way highway and doubled back. The methane reading spiked dramatically.

“Wow. This well is really leaking,” Petron said. We were circling the well in the van, and the methane reading was so high it went off their measuring device.

Petron hopped out of the van with her camera and started taking pictures. She had her partner, Jon Kofler, drive round the well-site slowly, taking samples of the atmosphere so she could do a chemical analysis back at the lab.

I could smell the chemicals that saturated the air. Kofler took out a gas mask and put it on. He said he often did this when the readings were high.

Petron said that methane didn’t smell like anything, but the other chemicals leaking did, and they were not good for you. She suspected that one of the chemicals being released was benzene, a cancer-causing chemical.

Across the highway was a small residential community and in one of the backyards was a trampoline, where two kids were jumping. Kofler drove through the community taking air samples and methane readings. Right there, on that lonely stretch of highway was a small, nondescript well leaking — no, spewing — methane and probably other toxic chemicals, too. How long had the well been leaking? No one knew. Petron had never taken measurements along that road before, although she had driven down it many times.

Petron said that our day laid out the problem. All day we had seen small and big leaks of gas across the gas infracstucture. There were many times when there were no leaks at all.  And then, all of a sudden, there was a huge leaker, what Petron called a “super emitter.”

The day with Petron prompted many questions in my mind. Where were the regulators? How many “super emitters” were out there nationally? Why hadn’t the company that owned the methane spewing well done something about that leak? Did they even know? Was methane regulated at the federal level? What about at the state level? If not, why?

In the year since visiting Boulder, I’ve traveled to Utah, Arkansas, Pennsylvania, Boston, Washington, D.C., and many other states and cities looking into gas leaks and their impact on climate change. Several more studies have been published in peer-reviewed journals and are in the works on this topic since those first two studies rang a warning bell. And earlier this year, Colorado became the first state in the nation to regulate methane leaks from oil and gas, which seems to be recognition that there is a problem out there. Recently, President Obama announced that the federal government would study the methane issue from all sources, including oil and gas, and decide if regulation is warranted. One thing is certain to me after working on this project: We have no idea how much gas is leaking and, hence, no idea if gas is really cleaner than coal from a climate perspective today.