Drought: Problems on the East Coast, too

A 2008 wetland fire at Pocosin Lakes National Wildlife Refuge in North Carolina burned through several feet of peat soil, stilting trees and emitting high levels of carbon dioxide. A sever drought intensified the fire, which lasted six months and ravaged more than 41,000 acres along the coast. 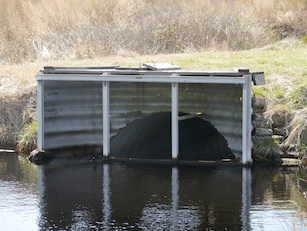 As record-breaking drought dries up California tomato fields and Texas cattle ranches, few headlines mention the impact of drought on the East Coast.

Southeastern states are still recovering from a three-year drought that ended last year, drying reservoirs in Georgia and decimating the oyster harvest in North Florida. It may have also played a role in blue crab deaths, air pollution, wildfires and saltwater contamination of drinking water.

The uncertain effects of this dry spell have made climatologists and environmental scientists aware of just how little they know about drought conditions on the Atlantic coast. They know even less about how global warming might increase health and environmental risks from drought in the years to come.

“It became clear that drought in coastal areas is not well understood,” said Kirstin Dow, an environmental geographer at the University of South Carolina. “People know how it affects agriculture, but not the environment or human health.”

Dow and her colleagues are developing a pilot program in the coastal Carolinas to close the knowledge gap. The federally funded program, led by the National Oceanic and Atmospheric Administration, will create tools to help East Coast states predict and respond to drought.

Two things are clear: Drought dries out flammable marshland soils and affects salt levels in tidal rivers and swamps. Both may put human health at risk, endangering the air people breathe, the water they drink and the seafood they eat.

As part of the drought project, water scientists with the U.S. Geological Survey in South Carolina are developing the first drought indicator that includes water salinity levels.

Without enough rain, salt water from the ocean seeps into freshwater streams and rivers that flow into the Atlantic. Saltwater can then seep into the drinking water supply of coastal towns that pull water from those rivers.

Saltwater intrusion into drinking water has become a big problem in places like Georgetown County, South Carolina, a growing coastal community just south of Myrtle Beach. In recent years, the Waccamaw River has run so low that the local utility company has had to shut pipes that pull water from a section of the river when high tides push ocean water upstream.

Global warming will likely make increase the problem for the county’s 20,000 people who rely on the river for drinking water. Less water and a sea level rise of two feet could triple the amount of days the Waccamaw River would be too salty for drinking in the county, according to a climate-change scenario published last year by the U.S. Geological Survey.

“I’m very worried,” said Brad Corkum, operations director at the Georgetown County Water and Sewer District. “It’s a tenuous situation for everyone on the coast.”

The water company built ponds and converted wells to store extra river water after a severe drought hit the area in 2002, Corkum said. In an extreme emergency, they are now prepared to pay contractors to remove salt from the water through reverse osmosis –an expensive process.

A drought index that uses salinity data will give Corkum and other water managers a chance to better prepare for such emergencies, said Paul Conrads, a U.S. Geological Survey scientist who is developing the index. It will also help states protect their coastal ecosystems, he said.

South Carolina’s beloved blue crab is one potential drought victim. Biologists at Clemson University are currently researching the link between blue crab deaths in rivers south of Charleston and salinity levels in the water.

Research shows that the blue crab harvest has declined by 40 percent since 1998, with the steepest declines corresponding to extended drought from 1999 to 2002. There’s a 25 percent chance that salinity in the water played a role, said Michael Childress, a Clemson University biologist who is leading the research.

His team found that river mouths with saltier water had more crabs infected with the lethal parasite Hematodinium. On the other hand, crabs didn’t thrive in water with the lowest salinity levels either.

“The big unknown is: how will crabs respond to a more variable environment?” he said.

A changing climate with extended drought puts the area’s marshlands in danger too.

Scientists are creating a drought index that measures the risk of fire in East Coast forests. The peat soil found in coastal swamps is highly flammable and fires can take months to extinguish.

That’s one reason North Carolina had more wildfires last year than all states except California. However, the state’s 3,514 fires ravaged a smaller area than those in Western states.

The pond pine swamp at Pocosin Lakes National Wildlife Refuge is still scarred from a wildfire in 2008 that scorched more than 64-square-miles of land in three counties near the Outer Banks. It happened at the peak of a summer drought and took firefighters six months to put out.

“The peat soil is like baby charcoal,” said Ed Christopher, a fire management officer at the refuge.

Christopher met with climate scientists last year to explain the dangers that could arise if dry spells get worse. For one, peat soil fires would last longer, emitting dangerous levels of carbon monoxide into the air, he said. Smoke from the notorious Evans Road Fire in 2008 polluted air as far as Raleigh, triggering air quality alerts and forcing people to evacuate towns near the refuge.

In 2011, during the most recent drought, prolonged fires burned through a foot of peat soil in the refuge, lowering ground levels at a time when sea levels are rising.

Now Christopher is using a culvert system to trap rainwater and that is poured over soil to prevent it from drying out.

“I’m concerned,” Christopher said of the fires. “With persistent, hot dry climate they can do more damage to the landscape.”