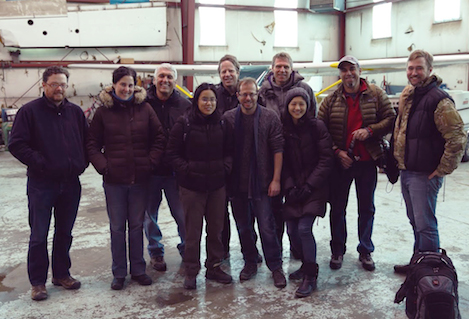 Margaret Ebrahim and Jolie Lee spent more than a year working on “Years of Living Dangerously,” a new Showtime documentary about the impact of climate change on people around the world. They produced “Chasing Methane” and “Against the Wind,”  two stories in the nine-part series.

“It’s a combination of investigative, in-depth journalism and feature film, which is unusual, I think, in the documentary world,” said Lee, the associate producer.

Some scientists, researchers and even President Barack Obama say that natural gas is a “clean fuel” because it burns cleaner than coal, but Ebrahim and Lee discovered the ramifications of investing in natural gas may be greater than envisioned.

“As you started lifting the rocks up, there was so much there,” said Ebrahim, senior producer at the Investigative Reporting Workshop.

The duo traveled to 10 states, including Arkansas, North Carolina and California, to shoot more than 100 hours of footage. They interviewed cattle ranchers, scientists, politicians, lobbyists, activists and government officials.

“You’re not really doing a story about an issue. You’re doing a story about somebody caught in a major issue of the day, and you’re telling their experience,” said Ebrahim. “That’s what the series is suppose to be, a deep dive into a couple of characters that are involved in some of the most pressing issues of the day and are going against conventional wisdom.”

In these short videos, Ebrahim and Lee talk about their involvement with the project, their experience working with celebrity correspondents and the surprises they faced along the way.

The executive producers of “Years of Living Dangerously,” David Gelber, Joel Bach and Arnold Schwarzenegger, teamed up with Hollywood directors James Cameron and Jerry Weintraub to bring the program to television. “Years of Living Dangerously” will premiere on April 13 and run weekly through early June (check cable listings for times in your area).

Video 3: What works for TV

Video 4: Another view on climate change