U.S. deportations continue under the Obama administration, which has set records for removal of undocumented immigrants under its enhanced enforcement policies.

Most deportations to Mexico

This Top 10 countries, after Mexico, that migrants were returned to in 2010. 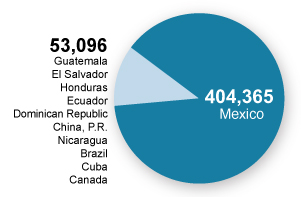