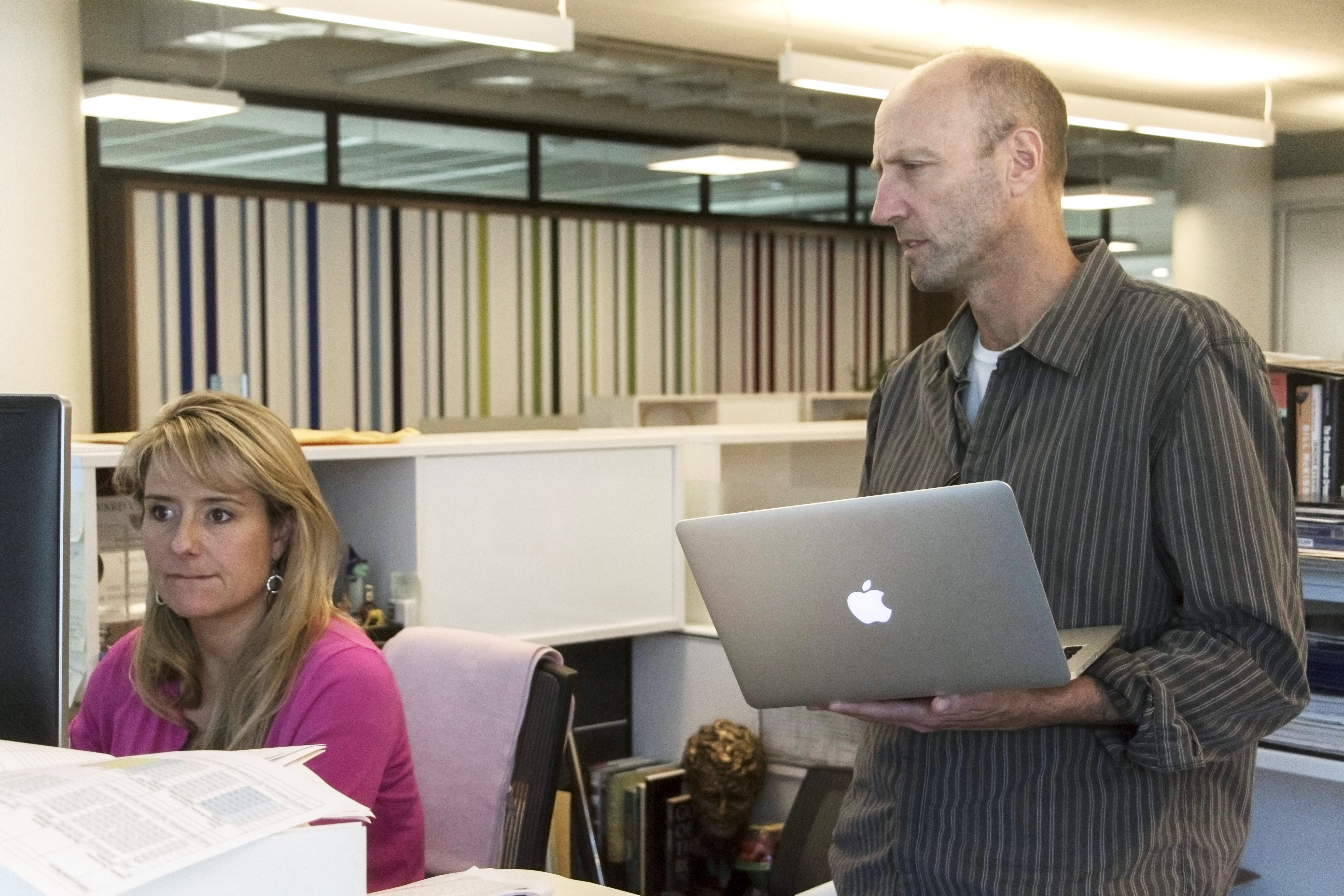 Sullivan and producer Rick Young go over their notes at NPR.

She uncovered the flaws behind the bail-bond system for a National Public Radio program “Bonding for Profit,” and spent a summer gutting fish in Alaska, so NPR correspondent Laura Sullivan is no stranger to investigative journalism or personal challenges. Her latest venture: the world of television documentaries as the PBS FRONTLINE correspondent for “Business of Disaster,” which airs nationwide May 24.

Sullivan said she didn’t realize the amount of time and different mentality video requires until she spent many months working on the program. Having come from print journalism originally — she covered the Justice Department for the Baltimore Sun — she was surprised by how long it took to get shots and set up film sequences.

“I think the public is spoiled because they have no idea, no understanding, of what it takes to bring these documentaries to life,” Sullivan said. “But that’s the way it should be. It should look easy.”

And the extra effort works, she said. “You realize that this is an art form and it’s helping to tell the story,” Sullivan said. “These images are actually moving the story forward.” 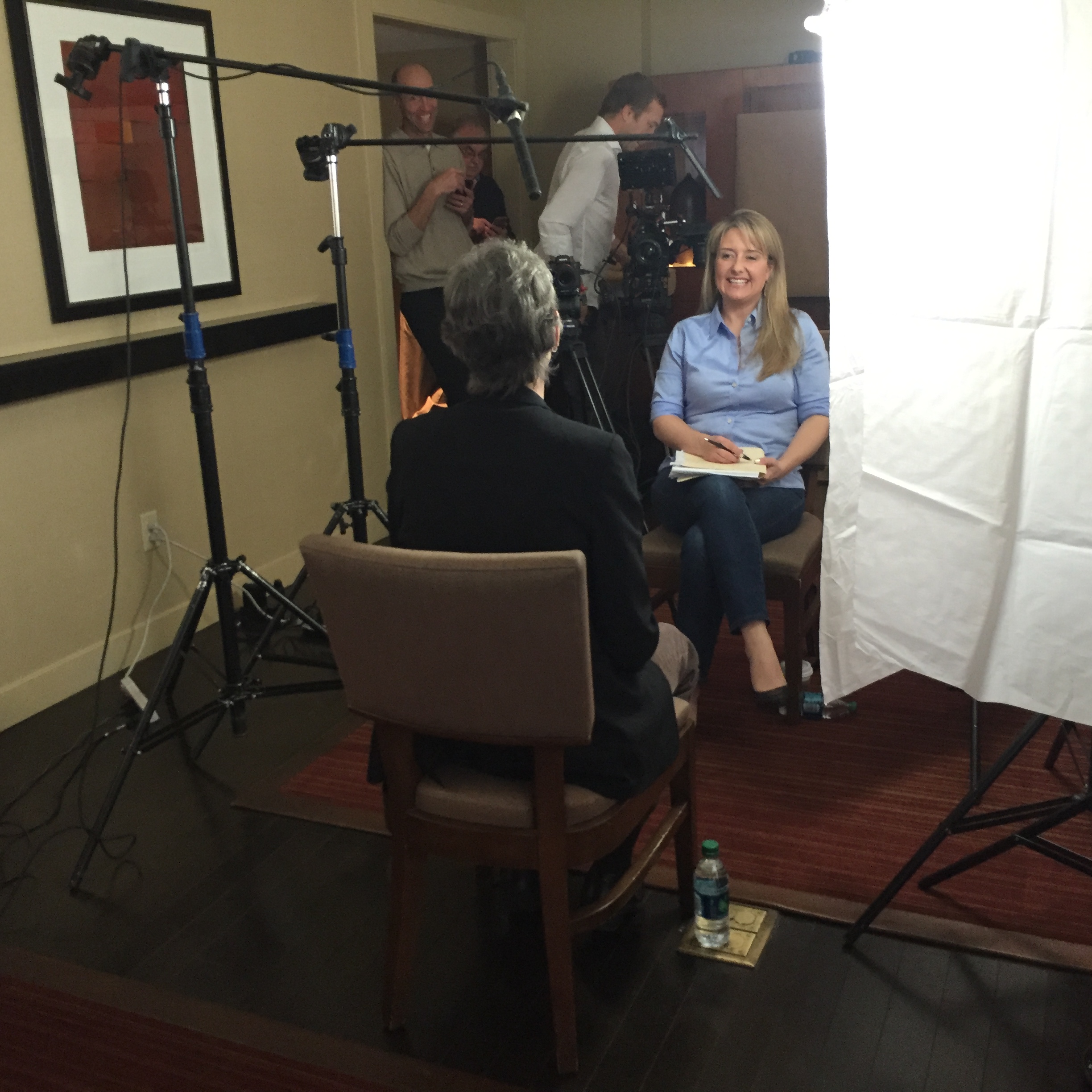 The FRONTLINE team sets up for an interview in Washington.

This newest FRONTLINE-NPR investigation examines why thousands of residents of New Jersey and New York are still struggling three years after Superstorm Sandy devastated their communities. Sullivan, who teamed up with the FRONTLINE production team based at the Investigative Reporting Workshop (Rick Young, Emma Schwartz and Fritz Kramer), did a deep dive into the nation’s disaster recovery system, revealing major problems with the flood insurance program and efforts to build more resilient communities.

She was approached about the story idea after Young met with Sullivan and reporter Justin Elliot to discuss the NPR/ProPublica series on the Red Cross. The FRONTLINE team was interested in broadening the reporting on disaster aid and began to discover significant problems with the national flood program and Sandy recovery. NPR agreed to partner on the investigation and Sullivan joined the team as a correspondent in October.

In nine months of interviews, the documentary came together. Piece by piece, they uncovered more information.

“That’s the sign of a good story,” Sullivan said. “That it keeps going.”

Working on the FRONTLINE/NPR investigation has been “eye-opening,” she said, even though she has reported on disaster recovery before. It’s been a process of “understanding the nature of disasters and truly wrapping my mind around how bad they are and how much worse they’re going to get,” Sullivan said.

Sullivan describes her decision to be a journalist as “a whim.” She can’t recall what motivated her decision, but she knew as a senior in high school that she wanted to be a broadcast journalist.

“It seemed like a job full of adventure,” she said.

But journalism was more than adventure and autonomy for Sullivan. She still describes meeting new people as one of the best parts of the job.

Sullivan recalls the story of Ann Marie Cianci, whom she met while working the story. “She was just a real fighter and a hardworking person who got screwed by the system,” she said.

“She picked up quickly on the medium shift,” Young said. The surprise for Sullivan came in the field, learning what it takes to produce video — hours of shooting and multiple shots of the same setting.

Sullivan attended Northwestern University, and a chance to work on a class project that led to the release of four men from prison, affirmed her career decision. The student investigation found that four men, who had been serving 18 years in prison, had been wrongfully convicted of a murder on the Southside of Chicago.

“After that it was pretty clear,” Sullivan said of her career path. She enjoyed the ability to hold institutions accountable to help people and affect change. And she has strived to do just that.

Sullivan’s journalistic efforts have resulted in multiple in-depth and award-winning stories. For an investigation into the federal foster care system’s treatment of Native American children, Sullivan won her third Peabody Award. The Investigative Reporters and Editors organization honored Sullivan for her story on a 1972 murder at the Angola penitentiary in Louisiana. She won her second Gracie Award from the Alliance for Women in Media for her examination of rape on Native American reservations.

Sullivan does worry about the future of investigative journalism. She wonders what activities are happening on local and national levels that are being overlooked because of diminishing investigative resources. The public needs to be aware, she said.

“Maybe the nonprofit model will be able to fill the void,” Sullivan said.

Being able to form relationships with sources to uncover information is an important part of being a journalist, she said. Sullivan spent days in women’s shelters for one story, eating Cheetos and just chatting with people.

“You have to go and literally spend the time on people’s couches,” Sullivan said.

In order to make interview subjects comfortable and talkative, she said reporters have to “be genuinely curious,” and that “people can tell when you’re being authentic.”

Sullivan advises young reporters to experience life outside their comfort zones. It’s important to “see the lives of other people for the value that they have,” she said. People are more likely to open up “when you approach things not with judgment but with curiosity.”

Sullivan also said young journalists should learn from their mistakes. “I almost think you have to make those mistakes and stumble along the way to become a really great journalist,” Sullivan said.