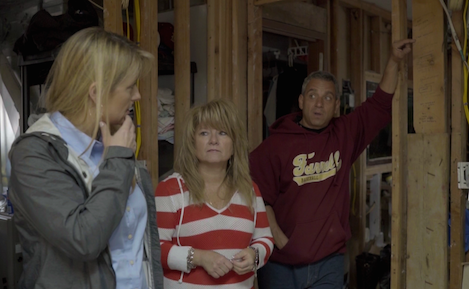 Correspondent Laura Sullivan talks with Diane and Nick Camerada, who are still waiting for their home to be repaired and raised on Staten Island.

As part of our joint investigation into the business of disaster recovery, FRONTLINE and NPR tried to determine how much profit the private insurance companies running the Federal Emergency Management Agency’s National Flood Insurance Program (NFIP) were making.

The only existing snapshot of the companies’ profits we could find was from a 2009 report by the Government Accountability Office, Congress’ investigative arm. That report examined six companies between 2005 and 2007 and found that profits from the FEMA payments ranged from 11.6 percent to 28.3 percent, with an overall average of 16.5 percent. The GAO urged the agency to take a deeper look at what the profits in the program were and use this information in setting compensation for the companies in the future.

We wanted a more current and comprehensive assessment, and spent months gathering revenue and expense data for all the NFIP companies from the same key sources that GAO used in its report.

The revenue data comes from FEMA’s calendar year records on how much it pays the flood insurance companies. It gives the companies about 30 percent of all the premiums collected, plus additional fees for handling claims, appraisals and other services.

The expense data comes from the National Association of Insurance Commissioners, which regulates most lines of insurance. Companies are required to submit certified annual statements to the NAIC. Those statements detail company expenses for their flood business, for both selling policies and servicing claims.

In doing the calculations, we used a similar method to the GAO’s 2009 report. We defined revenue as total FEMA payments and subtracted the companies’ expenses. And like GAO, we also focused on pretax profits. That’s because it’s impossible to know the exact rates that private insurers pay based on publicly-available information.

Because of its role as a government auditor, the GAO was able to get additional figures from internal company records. Based on this, GAO’s 2009 report noted that at the time of its analysis, some companies had underestimated their expenses to the NAIC. This meant that at that time, using NAIC data alone would have overstated company profits. Following GAO’s report, the NAIC issued new guidelines clarifying that flood insurance companies are required to report their total expenses. As a result, we focused our analysis on the four most recent years of data available since those new guidelines took effect, 2011-2014. The NAIC told us it believes current expense reporting by the companies is accurate.

It is important to note that profits can be attributed to varying years, depending on how companies account for revenue and expenses. This is particularly true when there is a big storm near the end of a year – as was the case with Superstorm Sandy, which hit in late October 2012. Using different accounting methods, some company profits in the wake of Sandy might be reflected in 2012 rather than 2013 – though over time these differences even out.

Without access to the companies’ records, the two data sets that we analyzed are the best publicly-available sources to look at the scale of profits in the flood insurance program.

• Between 2011 and 2014, industry-wide profits averaged $325 million a year –nearly 30 percent of the revenues the companies receive from FEMA.

• In the wake of Sandy, industry-wide profits were about $400 million, a reflection of how big storms mean bigger business for flood insurance companies. That’s because when there are more claims, insurers generate more in fees and end up making more money.

The Insurance Information Institute, which is funded by the companies, disputed our findings, calling them “far out of line” with industry profits. Though it did not provide any data, it said that profits are closer to 10 to 15 percent of FEMA payments, after taxes, based on discussions with companies in the flood program. The group also said that several large insurance companies have left the flood insurance market in recent years. “Basic economics would suggest that carriers should be stampeding to participate in the [flood] program were it as profitable as Frontline suggests,” it said in a statement.

In response to our analysis, FEMA said it will not tolerate windfall profits and plans to look into its compensation model and has proposed new changes this week that would give it more authority to do so. GAO is also conducting a new analysis into how the insurance companies are paid and how much they are making.