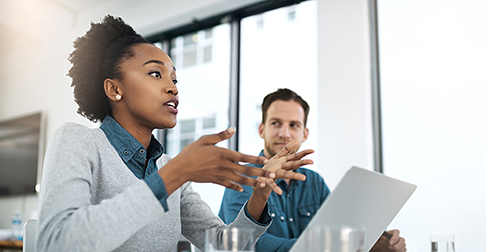 Margaret Sullivan remembered standing in front of a class of Northwestern University journalism students. She noticed the difference there from the newsroom meetings she had led in previous years.

Her class of 20 had just three or four men. But in her decades-long career as a journalist and editor, she had become accustomed to news meetings with a dozen men and, at best, one other woman.

Each year, women comprise more than two-thirds of graduates with degrees in journalism or mass communications, and yet the media industry is just one-third women, a number that only decreases for women of color, reports show.

Since the 1970s, most American industries have demonstrated an upward trend in female employment. Journalism is flatlining.

Whether it is a schedule incompatible with family life, the lack of female leadership or the glass ceiling, women are not finding what they need in today’s American journalism, and they are leaving or being pushed out. Interviews with veteran female journalists and a few of the industry’s rising stars show shifts and differences in how women think about their career trajectory and work-life balance in today’s online world.

From classroom to newsroom

“I’ve often wondered is journalism going to become majority-female,” said Sullivan, who has held leadership positions at The New York Times and now writes a media column for The Washington Post. “But that doesn’t seem to be happening and I don’t know why that is.”

Men still receive 62 percent of bylines and other credits in print, online, TV and wire news and have 84 percent of the last century’s Pulitzer Prizes, according to the Women’s Media Center report “The Status of Women in the U.S. Media 2017.” 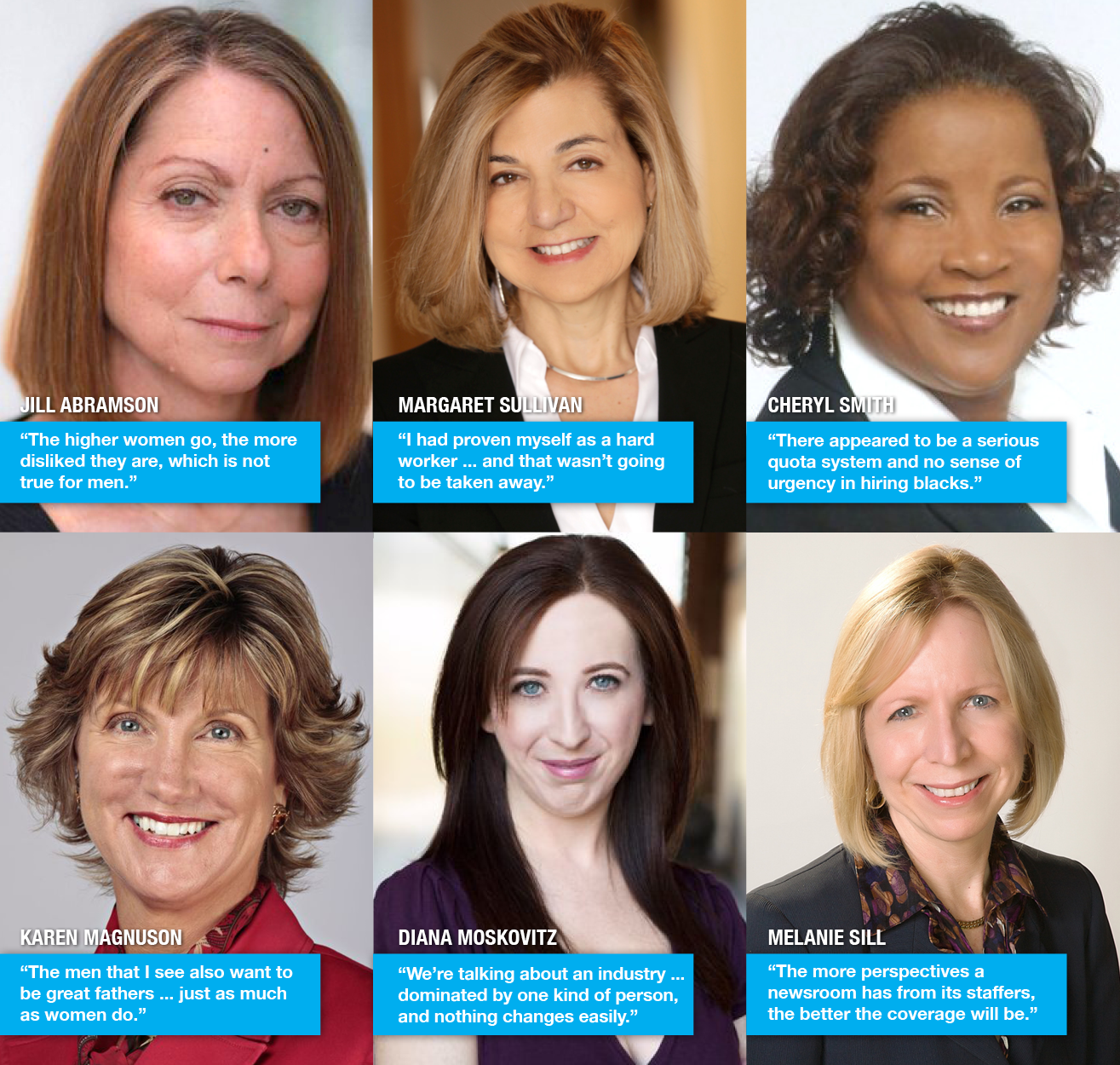 Melanie Sill, the first female executive editor of the News & Observer in Raleigh, North Carolina, said the female majority in journalism programs has been present since the early 1980s when she was a journalism student at the University of North Carolina at Chapel Hill.

Sill said she expected a shift in the last years toward gender parity.

Not everyone thinks women are lacking opportunities in journalism.

Karen Magnuson, editor of the Democrat and Chronicle in Rochester, New York, and the co-chairperson of the ASNE diversity committee, said she wants to see more women working in newsrooms nationwide, but thinks women are choosing to leave newsrooms, not being kept out.

“My personal experience is that women have equal opportunity,” Magnuson said.

Magnuson said improving racial and ethnic minority representation should be the real priority in diversifying newsrooms.

Black women still only represent 2.5 percent of the overall journalism workforce, according to the ASNE 2016 census.

Cheryl Smith, secretary of the National Association of Black Journalists and the editor and publisher of the multiplatform news organization IMessenger News Group, found a lack of opportunity for journalists of color when she graduated from Florida A&M University in 1980.

“There appeared to be a serious quota system and no sense of urgency in hiring blacks,” she wrote in an email to the Workshop.

Smith said both race and gender have affected her career.

She lost a job opportunity to a man because he was married and needed to support his family. At the time, she was a single woman raising her sister’s children, which she believes only hurt her in the application process.

Why women are leaving

Anna Griffin described in her September 2014 Nieman Reports article “Where are the Women?” a cycle of men hiring men. She noted men historically have held roles as editors and tend to promote other men. When women fail to see opportunities at higher levels, they leave journalism, making fewer women available for the next promotion.

Sill refers to this cycle as “institutionalized sexism and racism,” noting that in her experience, as money got tight, women and minorities were pushed out, especially from positions of power.

Only 63 percent of news organizations reported having at least one woman among their top three editors in the ASNE 2015 census. That statistic has remained static over the past 15 years with the number of female supervisors staying at about one-third.

As in many professions, women who make their way to the top — as Jill Abramson, the first female executive editor at The New York Times, did — find themselves negatively labeled for their leadership styles.

Abramson said she was seen as “unlikable,” whereas men who acted like her with similar presentation styles were called “leaderly.” Fired in May 2014, Abramson said that though gender was not the main reason for her departure from the Times, it played a role.

“I think I was judged unfairly by a double standard tied to gender at the Times,” Abramson wrote in an email to the Workshop. “The higher women go, the more disliked they are, which is not true for men.”

Abramson hired a lawyer in 2014 to investigate the pay gap between her and a male predecessor, earning her the label “pushy” from the Times’ top management.

Even before that, Abramson made a conscious effort to put women in management positions to shift the culture at the Times.

“Having women in leadership makes a difference,” she wrote in an email to the Workshop. “That’s why I made the masthead, the top editorial ranks, half female for the first time.”

For women with families, getting ahead in the field is even tougher.

Sullivan, who has two children, said she felt she had to work harder than her male colleagues to prove herself deserving of promotions.

“It’s simply a fact of life that women are the ones who have children,” Sullivan said, noting women often require more time away from work than men.

When she sought a promotion to managing editor at The Buffalo News, she was, at the time, assistant managing editor for features, which she said was a “traditionally female role.” Though the features position allowed her flexible hours to take care of her young children, it kept her on the “soft” side of journalism, which made her seem like a less “serious” candidate for the managing editor job.

In the end, Sullivan thinks she was promoted to The Buffalo News managing editor job, in part, because her gender provided a fresh viewpoint. Since then, Sullivan has remained in the leadership ranks of newsrooms.

“It’s hard to pin down exactly how it affects you,” she said. “Sometimes there’s a kind of pressure that’s hard to really quantify to think like the majority and to take the edges off.”

The difficult balance of work and family in a high-pressure profession characterized by irregular hours and low pay is a common theme among female journalists.

Christine Glancey, a deputy editor of newsroom standards at The Wall Street Journal, has two children. In 2007, the family moved to Hong Kong for her job opportunity with the Journal when her kids were 7 and 9. The family returned to the U.S. in 2009.

“If I was a librarian, would I have more children?” Gancey asked. “I don’t have an answer for that.”

The decision to have children is one many working parents face. But female journalists interviewed said the nature of the job makes its demands unique.

Sill said many female journalists consider, “If I want to advance my career, I have to sacrifice my family.”

And, she continued, their perspectives are needed to help build better coverage. The more perspectives a newsroom has from its staffers, the better the coverage will be, Sill said.

“You’re harnessing the value of having younger people and older people and people of color and people who grew up in low-income neighborhoods and people who play the piano and whatever it is they bring,” Sill said. “You can see it in their coverage. Those changes in coverage help you reach new audiences.”

Digital platforms without an established hierarchy and culture like many traditional newsrooms are offering flexibility and mobility for women and minorities, Sill said.

A 2016 ASNE survey supports that. Women made up nearly 50 percent of online-only news organization employees.

Diana Moskovitz, a senior editor at Deadspin, has not experienced gender parity in her digital journalism career. She primarily covers sports, a male-dominated industry, and in July USA Today Sports’s The Big Lead named Moskovitz to its 40 Under 40: Sports Media Talents.

“We’re talking about an industry that for so long was dominated by one kind of person, and nothing changes easily,” Moskovitz said. “There might be more women in online platforms because of that untethering from tradition, but I wonder if it becomes more like traditional companies as it grows and then falls back into old habits.”

Moskovitz, who previously wrote for the Miami Herald, said she had more female colleagues and role models in print journalism than in her current position in online media.

However, in print, women represent 38 percent of newsroom employees.

Though the trajectory of women in newsrooms has been positive in the past, recent data reflects stagnate numbers.

The percentage of female journalists more than doubled between 1900 and 1971. But, once it reached 37 percent in 1999, it plateaued, according to a 2009 study by Scott Reinardy, a professor at the University of Kansas.

That is nearly 10 percent behind the U.S. workforce, in which women represent 47 percent of employees, according to the Department of Labor.

In another 2015 study, Reinardy surveyed journalists about their levels of burnout, job satisfaction, organizational support, role overload and intentions to leave their job. He found that women reported higher levels of role overload and exhaustion and a higher rate of intent to leave the field. What’s worse: Those numbers are increasing for women, potentially moving newsrooms further away from gender parity.

Reinardy said in an interview with the Workshop the stress created by time managing family and work compounded with the innate stress of the industry —  reported by Forbes as the sixth most stressful job — leads to a higher burnout rate among female journalists.

Magnuson said that burnout is not a trend unique to women but one that affects all journalists.

However, when Reinardy asked survey participants about their intentions to leave newspapers, 66 percent of women answered “yes” or “don’t know,” whereas the percentage for men was 55.

Reinardy added that this number was even higher — 74 percent — for women under the age of 30.

Reinardy said how an organization supports its employees through time, compensation and workload oftentimes defines their career path. This is especially true for women starting families, often in the age range most likely to leave.

“To retain talent, you need to look at your support for people’s family lives,” Sill said. “That’s key and that’s especially key for women. That’s just the reality.”

Sullivan described providing such support as “being human.” She said her editor at The Buffalo News gave her the time and flexibility she needed to raise her children because he knew she was “good for it.”

“That made me feel reassured that I could do both aspects of my life without punishment,” Sullivan said. “I had proven myself as a hard worker and someone who is diligent and conscientious and that wasn’t going to be taken away.”