They had a choice.

They could watch the Pulitzer-prize winning Point Reyes Light newspaper continue to divide their rural Marin County community or worse, sold to someone with little desire of continuing the paper's long tradition of quality journalism. Or they could buy it and turn the money-losing newspaper into a media institution that fosters community outreach and educates journalists from the region.

So at a time when many U.S. cities are seeing mastheads disappear or newsrooms shrink in size, longtime West Marin County residents Mark Dowie, a venerable investigative journalist, and Corey Goodman, a scientist and educator, decided to buy the Light.

But the pair didn’t just buy the Light and reinvigorate a dispirited readership; they established the country’s first newspaper under a business structure that to date has been used to revitalize many struggling industries, but not journalism. 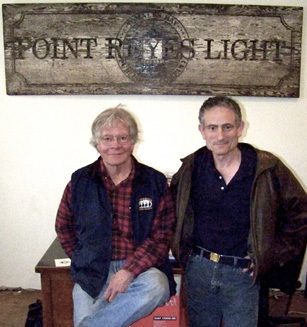 Investigative journalist Mark Dowie, left, and scientist Corey Goodman are at the helm of the new L3C.

“I think it’s actually a pretty ideal model for newspapers, especially small-town community newspapers like ours,” said Dowie, the former publisher and editor of Mother Jones magazine and one of the foremost investigative journalists in the country. In the 1970s Dowie uncovered the dangers associated with the Ford Motor Co.'s Pinto, leading Ford to recall of more than 1 million cars.

He has turned the newspaper into an L3C, a cross between a nonprofit and a for-profit corporation. The company will be run like a regular business but the focus is on social responsibility, not profit.

The L3C, enacted first by the Vermont legislature in May 2008, was built upon the existing Limited Liability Company structure, combining the financial advantages of an LLC and the social and tax advantages of a nonprofit organization.

The Light group turned to Vermont-based law firm Downs Rachlin Martin for help in establishing themselves as an L3C because California does not have its own L3C law.

The Light is now owned by the Point Reyes Light Publishing Co. L3C, a low-profit limited liability company, which is owned by Marin Media Institute, a nonprofit corporation that has applied for 501c3 status.

“We chose Vermont because they’ve been doing it longer and have allowed the formation of thousands of L3Cs across the country,” Dowie said.

The hybrid business model allows the Light to focus on providing quality journalism, while the Marin Media Institute will focus on fostering community relationships and educating journalists.

“The L3C was selected more because of the low-profit focus,” said Kim Butler, attorney with Downs Rachlin Martin. “We ultimately selected it because it does give us flexibility in future funding for the entity. We didn’t choose it because it may be the best model for a newspaper.”

“The motivation was to get it back into community ownership, community control, community service. We definitely did it for that reason,” Dowie said.

The Light is just the beginning. The institute will soon launch the North Coaster, a new quarterly guide to the northern California coast, featuring local artists, writers and poets.

Dowie and Goodman bought the Light with a portion of the $350,000 they raised via 86 individual donations. While neither will reveal the exact price of the paper, Dowie said the funds have paid for the purchase of the paper, the relaunch of its accompanying website, the legal support in creating the organization, the hiring of an additional reporter and the improvement of the salary base of its two editors.

The funding is also expected to sustain the newspaper during its first two years. Dowie said he will apply for grants to move forward on establishing educational and outreach programs through the Institute.

Dowie said he modeled the Light’s business structure on the Poynter Institute in St. Petersburg, Fla.

The Poynter Institute, originally called the Modern Media Institute, was founded in 1975 by Nelson Poynter, chairman of the St. Petersburg Times and its Washington affiliate, Congressional Quarterly. He wanted a nonprofit teaching and research institution that furthered his goals and values as a journalist.

After his death in 1978, Poynter left his controlling stock in the Times Publishing Co. to the institute to assure the newspaper’s independence and to commit the publishing company’s profits to further the goals of the nonprofit training and research organization.

“What we’ve done is create something very close to Poynter and their relationship with the St. Petersburg Times,” Dowie said. (The Light) was just a regular for-profit and we could foresee it making a small profit, but not the kind of profit that would be of interest to investors.”

Instead, they organized the Point Reyes Light Publishing Co. under the L3C model and sold it to the nonprofit Marin Media Institute.

The Light is now the third newspaper in the country operated and owned by a nonprofit institution, including the St. Petersburg Times. The third and the oldest operating nonprofit-run newspaper is the New London Day newspaper in eastern Connecticut.

The Day Publishing Co., established in 1881 by John A. Tibbits, publishes the daily paper that covers a 20-town area with a daily and Sunday readership of nearly 100,000. The company is owned by the Day Trust, which oversees operation of the newspaper, as well as oversees the charitable Bodenwein Public Benevolent Foundation. Under this structure, the newspaper remains independent and locally owned with all profits distributed through the foundation to non-profit organizations within the newspaper’s circulation area.

According to its website, “In 2002, The Day contributed $350,000 of its earnings to the foundation … Since 1971, the foundation has distributed approximately $6.5 million of the newspaper’s earnings in this fashion.”

Goodman said that originally he and Dowie had considered operating the Light as a nonprofit. But, after advice from their attorneys, they realized a hybrid structure would be a better fit.

“We set up the L3C, which basically says it is an establishment in which the bottom-line profit and shareholder value is not the function,” Goodman said. “It’s a for-profit, but we both know it’s not going to make a profit.”

Butler, the attorney, noted that the L3C just made sense given “the complementary purpose of the Marin Media Institute’s non-profit status and working through a subsidiary to own and operate the paper.”

The board of the institute, comprised of nine community members with journalistic and educational backgrounds, is not under the impression that the Light will be making a significant profit, Goodman said.

In its inaugural issue under new ownership, the Light noted that the weekly “has struggled financially for decades.”

After Pulitzer Prize-winning publisher David Mitchell sold the paper to Robert Plotkin — a former Marin County deputy district attorney who divided readers with his controversial ideas — the newspaper continued to lose money. Plotkin bought the paper from Mitchell in 2006 and divided the laid-back, agrarian region with his his desire to transform the Light into the "New Yorker of the West."

In the four years Plotkin owned the paper, it faced limited resources and reduced staffing.

"The owner had stripped the newspaper of its staff. We were working with no editorial staff. We had laid off two reporters over the last two years," said Tess Elliott, the Light editor for the past four years. "Our editorial staff consisted of interns, paid a very small stipend. They rotated every few months ... It was completely unsustainable."

Two years ago, it was reported that the Light’s income had dropped significantly.

In 2007, community members launched a new publication, The West Marin Citizen, in direct response to what they felt was Plotkin’s alienation. The Citizen, now in its fourth year, was approached by the Marin Media Institute with a proposition for a merger, but, citing a lack of information from institute members, they chose not to merge or sell.

Elliott said that under Plotkin, she would have left sooner rather than later and the newspaper probably would have folded.

Mitchell, who had a public falling out with Plotkin following the sale of the Light, said he has confidence the Light will do good work with Dowie on the editorial board.

"I have a high regard for Mark Dowie ... Unlike short-term publisher Robert I. Plotkin, Dowie is an experienced journalist with the perserverance to do it right," Mitchell said in an e-mail.

Could the Light guide the way for others?

With newspapers struggling to find a viable business model in the face of falling advertising revenue, both Dowie and Goodman know that as the first journalism organization to adopt the L3C model all eyes are on them.

“A lot of other publications are going to be watching us,” Dowie said. “If we can create a legal entity that can stay alive and service the community as a newspaper in print, I think you’re going to see a lot of emulation.”

While both Mitchell and Elliott are hopeful the Light has turned a corner in its struggles, both are hesitant to predict the future.

"From what I've observered, small-town weeklies do best with a single, strong publisher who lives in town and has his own money on the line. He doesn't have to answer to stockholders, a board of directors, or anyone else," Mitchell wrote in an e-mail. "(The Marin Media Institute) is structured like most nonprofits. Its board of directors, which acts as publisher, is composed of notable people whose primary concerns lie elsewhere. The result is a newspaper run by its staff. How that will work remains to be seen."

Elliott voiced similar concerns, saying that she still has a relatively small budget, which doesn't allow for expanded coverage.

"When we're working with the budget we have, we can probably better cover local news," she said. "The vision of growing is really going to have to grow along with the endowments, grants and donations."

As an L3C owned by a nonprofit, funding options for the Light are far more flexible than traditional newspapers that have historically relied on advertising revenue.

Goodman noted that many of the Light’s former advertisers — who dropped their support after Plotkin purchased the paper — have returned, thrilled with the new structure and refocus on community.

In addition to being eligible for grants, the L3C can apply for low-interest or no-interest funding from private foundations in the form of program-related investments. PRIs offer funds for organizations that cannot find them in the private investment market.

While there had been questions of whether the IRS would accept a newspaper as a charitable or educational entity, the Light newspaper eliminates that gray area by organizing under a nonprofit, community-minded institution.