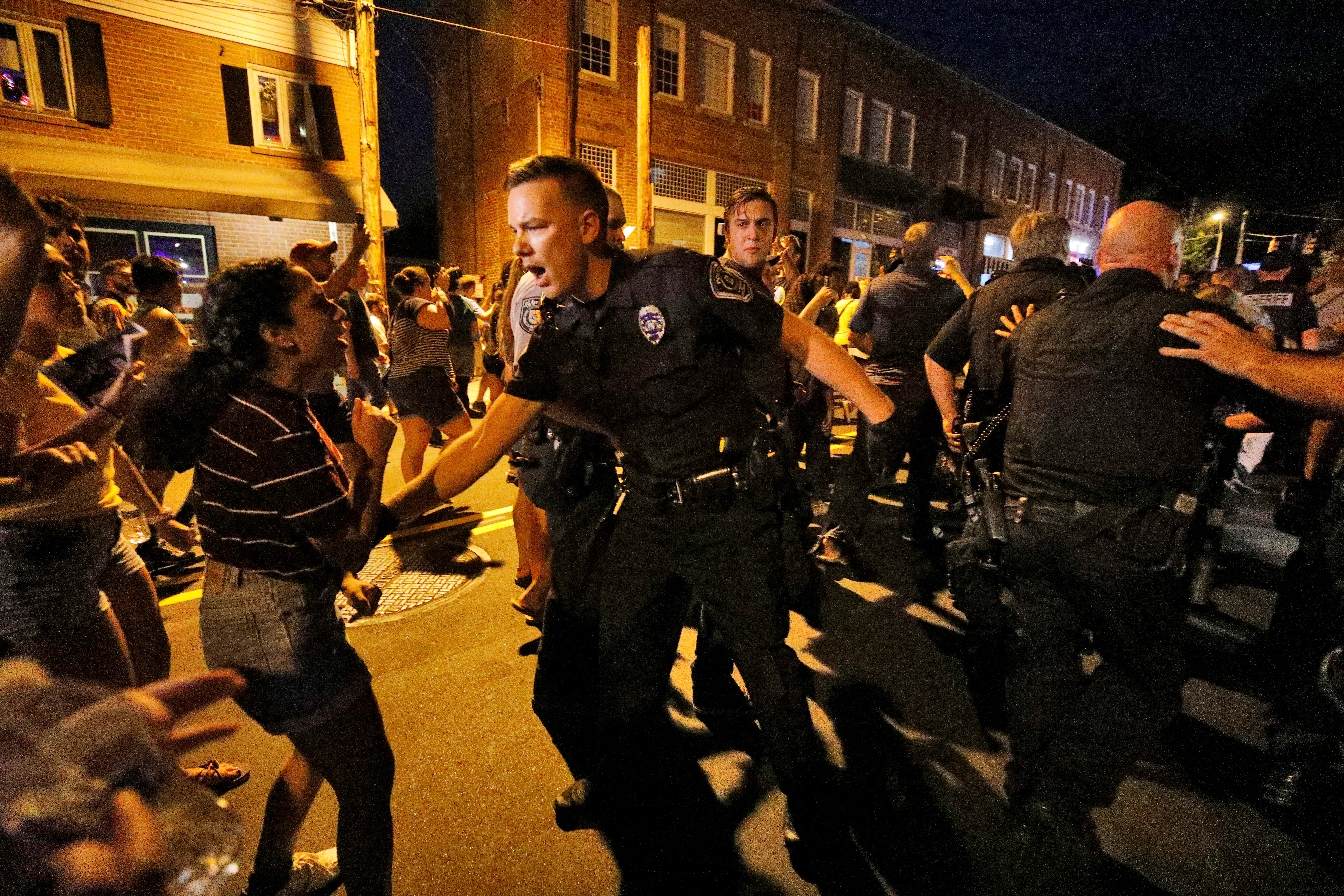 Police and sheriffs fight with protesters trying to free their detained colleague after a demonstration turned violent during a protest against a statue of a Confederate soldier nicknamed Silent Sam on the campus of the University of North Carolina in Chapel Hill, North Carolina,  Aug. 22, 2017.

This story is being co-published with poynter.org.

Most news organizations, if asked, would be hard-pressed to articulate a strategy when it comes to covering hate crimes. But that’s emerging as a rising concern as the number of such crimes rises around the country.

Nearly 900 hate incidents against minorities were documented by the Southern Poverty Law Center during the 10 days after Donald Trump’s election victory.

But even as hate crimes occur with more frequency, newsrooms for the most part tend to treat them as individual problems, not as systemic problems that require better follow-through and focus.

That’s a problem, said Christopher Benson, an associate professor of African-American Studies and Journalism at the University of Illinois Urbana-Champaign.

“Hate crime is treated as a single event by a perpetrator or a group of perpetrators, instead of looking at it in the context of a lot of systemic problems,” Benson said, because many of those in the media have “a belief that the system is fundamentally sound.”

Heidi Beirich, the director of the SPLC’s Intelligence Project, said she doesn’t think this is just about the media. Instead, she said, there’s a “huge reluctance from part of the public to be willing to accept that there could be something born and bred in America ... creating the same kind of violence” as seen in some other countries.

Beirich said many people can understand the Boston Marathon bomber, the shooter at the Orlando nightclub and the gunman who opened fire outside of an Arkansas recruiting station because they see them as people radicalized by terrorists overseas.

“But when it comes to domestic terrorism committed by white people, they're treated as a whole bunch of disparate attacks,” Beirich said. “That’s a huge problem.”

Part of the problem is that reliable data is often hard to come by. Though it’s the primary government effort on tracking hate crimes, the federal database is widely considered inadequate because its data solely depend on voluntary reports from state and local law enforcement.

The 2015 FBI report counted 5,850 hate crime incidents. But surveys from the Bureau of Justice Statistics estimated that the real totality is likely closer to around 208,000 for that year.

Trying to make sense of it all

“We are trying to investigate all the reasons why this data fall through the gap,” said Rachel Glickhouse, a journalist and the partner manager for ProPublica’s Documenting Hate project, said.

Documenting Hate is a collaboration of more than 100 newsrooms nationwide. The nonprofit news organization launched it in January hoping to “collect better data and try to get a better sense of how many hate crimes and bias incidents really happen in the U.S. each year,” Glickhouse said.

Playing the role of a “tip broker,” ProPublica compiles incident reports from news headlines, social media, civil-rights groups and law enforcement records, as well as hate-crime victims and witnesses. Each incident is treated as a “tip” and entered into a database. ProPublica shares the “tips” with its partner news organizations and relies on them for follow-up reporting.

This coalition has enabled many local media outlets to either report on single incidents that took place in their communities or to add additional sources. Its national partners even found patterns in the data analysis. For example, BuzzFeed published a series of stories on school children “using racist language to bully and harass other students,” Glickhouse said.

The job of documenting hate can be exhausting and frustrating. Glickhouse said that cleaning the database was demanding and her team faces a big challenge to verify as many tips as they can since more are coming in every day.

Trying to track the hate

Beirich and the SPLC have been monitoring domestic extremism activities since the 1980s and contend that Trump’s campaign and presidency emboldened nationalist groups. She said the president, whose controversial remarks on immigration and racist comments on minorities pandered to the ideology of white supremacists, have made the hate groups more politically active than ever.

The SPLC counted 917 hate groups nationwide in 2016. However, that list that has been criticized by some who think descriptions of hate have gone too far, including 47 conservative leaders.

More activities among people with racist ideas have occurred in the past year, including campus hate incidents and marches using or advocating keeping the Confederate flag and monuments in place. Such events culminated in Charlottesville, which Beirich described as “an amazing example of white supremacists and malicious groups all coming together.”

Months before the August Charlottesville white-supremacist rally, in which one person was killed and 19 injured, the FBI and the Department of Homeland Security warned in a joint intelligence bulletin that the attacks conducted by white supremacists had outnumbered ones by other groups in the country from 2000 to 2016.

“We assess lone actors and small cells within the white supremacist extremist movement likely will continue to pose a threat of lethal violence over the next year,” the bulletin read.

The FBI’s annual report on hate crime statistics also demonstrates a growing frequency of hate crimes within the past six years.

Researchers at the SPLC have to immerse themselves in a world full of page after page of racist language, an experience that Beirich described as “disgusting.”

More coverage at a crucial time

There were not as many organizations making such an effort in previous years. But more media outlets have realized that this problem needs to be addressed after last year’s election.

Journalism organizations have reporters now regularly covering protests and hate crimes. “When I talk to reporters today,” Beirich said, “as opposed to two years ago, they are absolutely more knowledgeable about this than they were.”

Such a shift in journalism is partially because of the fact that the country is undergoing a demographic transition. The Census Bureau said that babies of color outnumbered non-Hispanic white babies in 2015, and estimated that white Americans will lose majority status by 2042. This social reality has caused white supremacists’ anxiety and contributed to the rise in hate groups, Beirich said.

Benson said it is journalist’s responsibility to grow a certain level of cultural awareness in order to help the public reach a deeper understanding of these changes. “Until we are able to appreciate that context ourselves as media professionals,” Benson said, “we are not going to be able to clarify that for the public.”

Allison Wrabel, a reporter for the Progress, wished she could have stayed closer to Emancipation Park during the morning of Aug.12 to gain more firsthand knowledge of the “Unite the Right” march and the ensuing chaos. She was one of six reporters from the news organization who covered the rally when usually only one is on duty on Saturdays. And the staff continued to work around the clock for the following two weeks, she said.

Assistant city editor Mark Newton said he was proud of their work ethic and what they accomplished, which included publishing nearly 200 articles relevant to the rally in the two weeks after the event and taking a photo that symbolized the march worldwide. But he said he regretted that no one from the newsroom caught the scene of a white nationalist firing toward a counter-protester during the rally until the American Civil Liberties Union released the footage.

When the rally occurred, the community news staff felt constrained because it had only six reporters due to a recent staff cutback. “I think the regrets were the limitations of the size of our newsroom,” Newton said. “By day two, three, four, the exhaustion had set in.”

Beirich said that it is so important for community media to cover hate crimes, which still remain underreported. “They can document it and draw attention to it,” Beirich said. “Maybe because of their reporting, something can end up in the federal hate crime statistics.”