If Truth Be Told: Part 1

On June 24, 2014, PublicAffairs, an imprint of the Perseus Books Group, will publish "935 Lies: The Future of Truth and the Decline of America’s Moral Integrity." The book is the culmination of a nine-year reporting and writing effort by Charles Lewis, founder and executive editor of the Investigative Reporting Workshop.

In a three-part series written exclusively for the Workshop, Lewis expands on some of the book’s major themes, including how and why our national integrity has been eroded, and how a relative handful of reporters and other truth-seekers have tried to fight back in an increasingly hostile media environment.

Part 1 of the series looks at the historical trends that helped create some of these problems.

More information about "935 Lies," as well as Lewis’s other projects, is available at www.charles-lewis.com.

First in a three-part series. To read other essays: Part 2, Part 3.

In my lifetime, independent journalists have fearlessly exposed such abuses of power as the anti-Communist demagoguery of Sen. Joseph McCarthy, the institutionalized racism and injustice across the American South, the gross misrepresentations committed by the U.S. government during the Vietnam War, the wholesale illegalities and breaches of faith broadly known as the Watergate scandal, the excesses of corporate power that caused millions of Americans health-related peril from dangerous products or substances and the improper or illegal post-9/11 uses of governmental power.

Of course, this tradition of fierce investigative reporting long predates the early 1950s, when some dogged journalists carefully scrutinized Joe McCarthy’s reckless claims that Communists and Soviet spies had infiltrated every corner of the federal government. A half-century earlier, for example, the muckrakers used the pages of Collier’s Weekly, McClure’s Magazine and other publications to expose everything from corporate and political corruption to economic skullduggery and social injustices, their full-immersion brand of watchdog journalism often serving as catalysts for societal reform. Upton Sinclair’s writings about the meatpacking industry, for instance, contributed to the 1906 passage of the Meat Inspection Act. Samuel Hopkins Adams’s series for Collier’s on the bogus claims of patent medicines helped spur enactment of the Pure Food and Drug Act of 1906. And between late 1902 and 1904, Ida Tarbell wrote a seminal 19-part series for McClure’s, later turned into a book called "The History of the Standard Oil Company," that helped engender the 1911 Supreme Court decision to break up the monopolistic oil giant.

But those crusading reporters only followed the lead of earlier investigative scribes, whose ranks included Nellie Bly, née Elizabeth Jane Cochran. As an undercover reporter for Joseph Pulitzer’s New York World, Bly faked insanity and, in 1887, got herself temporarily committed to Blackwell’s Island Asylum, New York City’s first mental institution. Her newspaper series, later published in book form as "Ten Days in a Mad-House," confirmed in stark detail the rumors of patient mistreatment by the Asylum’s staff. Bly’s heroic efforts spawned a grand jury investigation, which led to much-needed reforms.

So it’s no exaggeration to say that the course of U.S. history was altered by investigative journalists’ scrutiny and accountability of those in power. Those efforts, it should be noted, typically required monumental investments — of time and money — by the reporters and their publications. Washington Post reporter Murrey Marder chronicled Sen. McCarthy’s every utterance and official action for four entire years, doing the sort of in-depth daily journalism that provided readers both detail and context. Moreover, Marder’s enterprise reporting helped give rise to the dramatic Army-McCarthy hearings (the first Congressional hearings nationally televised live) and debunked McCarthy’s reckless portrayal of the Army Signal Corps Center in Fort Monmouth, N.J., “as a hotbed of Communism and espionage.”

Similarly, Washington Post journalists Bob Woodward and Carl Bernstein reported the Watergate scandal for more than two and a half years, with special Watergate editor Barry Sussman overseeing every word of every story published over 17 months. And in the spring of 1971, when former Defense Department official Daniel Ellsberg leaked some 7,000 pages of documents cataloging U.S. government lies and deceptions in its conduct of the Vietnam War, a team of New York Times journalists holed up for months in a  Manhattan hotel to prepare a series on what would be known as the Pentagon Papers. As I detail in Chapter 2 of "935 Lies," publication of these materials by the Times, The Washington Post and other newspapers, along with bare-knuckled coverage of the infamous Watergate scandal, still represent the high-water mark in the long-standing struggle between raw political power and democratic values. 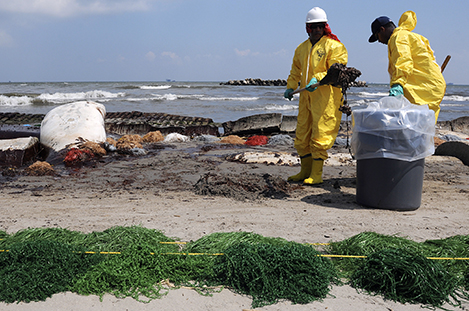 Health, Safety, and Environment workers contracted by BP clean up oil on the beach in Port Fourchon, La., May 23, 2010. Hundreds of contract workers cleaned up oil from the Deepwater Horizon/BP oil spill, which began washing up on beaches one month after the drilling unit exploded.

Time after time, however, those same tenacious media have been hoodwinked by the powers that be, whether they’ve occupied the highest echelons of government or Fortune 50 boardrooms. After all, there may be immediate electoral rewards for delaying and distorting the truth, as President Lyndon Johnson did in 1964 by secretly girding for a major war in Vietnam while publicly promising not to deploy more troops there. Or as President Richard Nixon did in 1972, authorizing a “dirty tricks” operation inside the White House that, among other things, derailed the campaign of his most formidable Democratic foe, Sen. Edmund Muskie. Thanks to the obfuscation and subterfuge, both incumbent presidents breezed to election victories in those years.

Corporations have proved to be just as adept at embellishing, delaying and distorting the truth, their self-serving hocus-pocus sometimes wreaking havoc throughout financial markets, their manufactured products like asbestos, lead paint and cigarettes imperiling the lives of millions. Regrettably, news organizations have often ignored — or even inadvertently enabled — such distortions, at great public cost and consequence. Just consider three of the more galling recent examples of such unbridled chicanery:

Lying with a straight face

In hindsight, it’s easy to point fingers at the media for not aggressively investigating the potential for such travesties, and then not pressing hard enough to document how these events unfolded, where blame lies, whether cover-ups were ongoing. But there may be another explanation for the presumed editorial negligence: Try as they might to unearth the truth, it’s likely that those investigating such stories were lied to.

Lack of transparency is "like a veil to keep the world from knowing."

It’s certainly happened to me. As a national investigative reporter for some three decades, I have scrutinized or interviewed members of Congress, presidential candidates, local judges, captains of industry, labor union presidents, government spooks, crooks and terrorists, FBI agents and Ku Klux Klansmen, billionaires and inmates with no known assets, brilliant thinkers and the mentally deranged. In my line of work, when I meet people, I hope for the best but prepare for the worst, and being lied to is, quite frankly, an occupational hazard. It’s fair to say that I have been lied to by people in every region of the country, whether in marble buildings, smoky bars or dusty jails. They’ve done it eyeball-to-eyeball, and they’ve done it by phone, fax, email and hand-delivered letter. And with rare exception, they’ve done it with a straight face.

Individually, of course, we’ve all been lied to throughout our lives, and collectively, as citizens, we’ve been lied to repeatedly by government officials and corporate bigwigs. Unfortunately, distinguishing fact from fiction has always been a formidable challenge, often with life-and-death consequences. But now it’s more difficult and confusing than ever, in this 24/7, warp-speed Internet Age, with instantaneous information from vast global search engines, social networks, thousands of broadcast and cable channels, and, by some estimates, a billion websites.

"Time after time ... those same tenacious media have been hoodwinked by the powers that be. "

For those wielding power, whether in the private or public sector, the increasingly sophisticated control of information is regarded as essential to achieving success. In addition to controlling the external “message,” these days strict discipline about keeping internal information buried is also imperative. The goal: Limit current and future access to  memoranda, phone logs, emails and any other documents that may be considered potentially damaging. To that end, mere delay may be the simplest, most effective public relations tactic for politically or financially sensitive matters — a hedge against the demands of our “viral”-communications environment. Too often, I’ve learned, years or even decades, may elapse between abuse of power and public realization, severely reducing the chances of any real reckoning or accountability for those responsible. And that, more broadly, underscores how frequently and significantly the public has been deliberately uninformed or misinformed about critical issues of our time.

Against these daunting odds, we expect in an open, pluralistic society that journalists and other watchdogs will safeguard the public interest and provide citizens truth and accountability. But that has not been happening enough over the previous few decades, largely because the journalistic ranks have been systematically decimated.

Blame it on the Internet, which has shattered the traditional circulation and advertising models that historically sustained print-journalism franchises. Blame it on media consolidation. Or absentee ownership, which typically puts the bottom line before the public good. Or the explosion in media choices, which leaves “legacy” media competing for eyeballs against everything from video games to user-produced “news,” be it Tweets from a historic demonstration or another epic production of housecat tricks. Whatever the reasons, in recent years most media corporations have reduced their commitment to serious journalism. Meticulous information-gathering and editorial oversight, especially regarding international and investigative reporting, requires substantial time and money, and, increasingly, traditional news organizations are unable or unwilling to do it.

As a result, we must sift through escalating clutter, including ever-more-savvy attempts to bypass the media gatekeepers altogether. For example, each successive presidential administration has been more ambitious in attempting to control its message, exploiting emerging technologies and upping the ante on personnel, public relations and “outreach” activities. As Newsday reported, the first administration of George W. Bush spent $254 million on contracts for video news releases — positive “faux news,” seen by tens of millions on hundreds of commercial-TV stations, often with no on-air identification or disclosure.

Not to be outdone, the Obama White House press operation — which boasts the first Office of New Media — is the largest and most technologically advanced in U.S. history. Meanwhile, because of the economic disruption afflicting commercial media companies, the number of White House reporters has declined, and the survivors may be less relevant than their predecessors, partly because they have less time for original reporting; instead, they’re hostages to the never-ending news cycle, which demands expediency over depth and breadth.

So as truth continues its slide toward obscurity, we’re concurrently left with fewer deep-dive reporters to ferret out critical information and help citizens distinguish facts from puffery. It’s a troubling phenomenon, but if we’d paid closer attention, we would have seen it coming.

Consider, for example, the prescient words of Benjamin C. Bradlee, former executive editor of The Washington Post, who presided over coverage of Watergate and publication of the Pentagon Papers. At the Theodore H. White lecture at Harvard, in 1991, Bradlee said, “It seems to me that lying has reached such epidemic proportions in our culture, and among our institutions in recent years, that we’ve all become immunized to it. What the hell ever happened to righteous indignation, anyway?”