How drones are changing disaster coverage

This story is being published by Poynter.org.

As Hurricane Irma churned inland in early September, photojournalist Brian Emfinger readied his drone. After the eye passed over Naples, Florida, calming the 100-mph-plus winds and torrential rains, he lifted off.

Drones provide a lower-cost way to gather footage and provide access to scenes that cannot be captured from the ground.

Andrew P. Scott worked for The Dallas Morning News when Hurricane Katrina struck the Gulf Coast in 2005. The paper chartered a helicopter and reported from the skies over New Orleans for several days, documenting the historic storm’s aftermath. The bill for the helicopter was nearly six figures.

“Huge story. We won a Pulitzer for that coverage,” said Scott, who is now the USA TODAY Network's director of operations for unmanned aerial systems and the deputy managing editor of multimedia. “But that’s a big outlay of cash for one story.”

The USA TODAY Network used drones to cover 2017’s record-breaking hurricane season and the wildfires that burned more than 180,000 acres in Northern California.

“We’ve been able to get crews out there and get to multiple different locations for a fraction of the cost,” Scott said.

Drones have become a more accessible — and practical — tool for journalists.

Emfinger, an avid storm chaser and photojournalist for KATV ABC 7 in Little Rock, Arkansas, purchased his first drone on Amazon for $50 in 2013. He practiced indoors and outdoors, getting a feel for both close quarters and open spaces. By the time he graduated to a more expensive drone, flying was easy and he began to quickly make a name for himself.

In 2014, Emfinger made national headlines when he used his drone to capture the destruction left by an EF4 tornado that had ripped through Mayflower, Arkansas, just moments earlier.

At the time, using drones for commercial purposes, including journalism, was a contentious topic. The Federal Aviation Administration (FAA) investigated the video, and Emfinger agreed to a cease-and-desist order. He was not able to use drones professionally until August 2016, when the FAA eased regulations and introduced the Remote Pilot Certificate. Since then, drone use has exploded in the United States, and as of September 2017, more than 60,000 certificates have been issued, opening the door for journalists around the country. 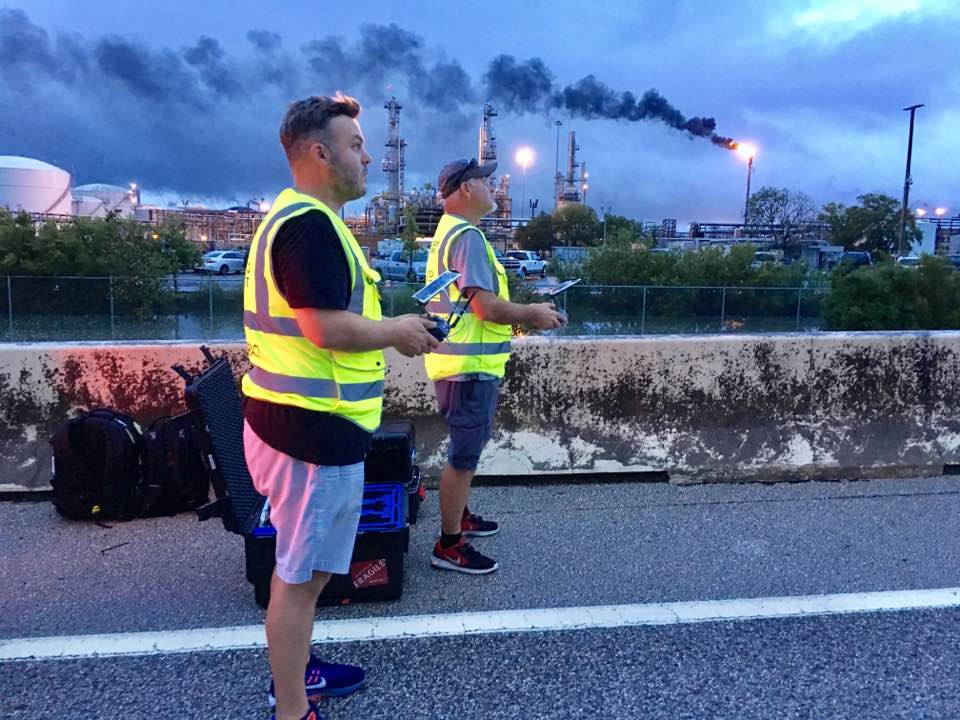 David D’Aquin and Scott Clause of the USA TODAY Network fly a drone during coverage of Hurricane Harvey.

More recently, drones were invaluable for gathering video of the destruction left behind by Hurricane Irma in the Florida Keys, David D’Aquin, the video director for the USA TODAY Network’s Gulf Region, said. When downed palm trees made it impossible to get shots from the ground, D’Aquin and his team flew a drone out over the ocean to get aerial footage of damaged homes back along the shoreline.

“In typical disaster coverage, that’s not an angle we can get,” he said. “It changes your perspective on covering news.”

And not only are drones less expensive than, say, helicopters, but they also provide news organizations — and their viewers — with a more intimate vantage point.

Drones add context, understanding and scope, said Agvent, who oversees a dozen FAA-licensed drone pilots for CNN AIR. “It’s tough to put into words simply because the visuals tend to tell that story,” he said. “It’s a very important tool.”

But not all drone use has been positive.

In October, a 24-year-old man was cited for flying his drone over an airport that was being used by crews who were battling Northern California’s wildfires, delaying operations for 10 crucial minutes. That same month, a drone hit a passenger plane that was attempting to land at Quebec City’s Jean Lesage International Airport.

“People have a lot of apprehension around the use of drones,” Scott said. “We have to operate safely and within the law.”

In addition to requiring all drone pilots to obtain a Remote Pilot Certificate from the FAA, USA TODAY has partnered with Virginia Tech to offer pilots a week-long, hands-on drone training program.

“That goes a long way to creating a positive relationship,” Scott said. “They realize we’re providing a valuable service to the community. It’s no longer something that they’re apprehensive about once they understand it.”

To get started on a budget, Emfinger suggested learning to fly — and crash — with an inexpensive drone. For experienced pilots willing to make a more serious investment, Emfinger recommends the DJI Mavic Pro, which he used to cover Hurricanes Harvey and Irma.

“It was probably about two and a half years of just sort of experimenting in the background and working with our legal team,” USA TODAY Network’s Scott said.

As for the future of journalism and drones  — it’s all up from here.

The USA TODAY Network has 22 FAA-licensed drone pilots in 10 markets around the country, Scott said. “We’re going to expand that significantly next year.”

Josh Benson contributed to this story.