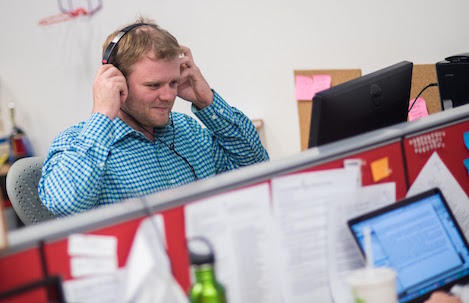 When reporter Patrick Madden heard about the case of Dwight Harris being charged with assaulting a police officer from his motorized wheelchair, he knew something was amiss. He wanted to know how and just how often how often this happens. To find out, Madden and WAMU teamed with the Investigative Reporting Workshop and Reveal to launch an unprecedented examination of nearly 2,000 assault cases in the District ...

Patrick Madden of NPR member station WAMU 88.5 is the winner of the annual Daniel Schorr Journalism Prize, named for the respected NPR senior news analyst and veteran Washington journalist who died in 2010.

The $5,000 Schorr award, sponsored by WBUR and Boston University, and funded by Jim and Nancy Bildner, recognizes a new generation of public radio journalists under the age of 35 seeking to inspire them to stretch the boundaries of the medium.

Madden was cited for “Assault on Justice,” a collaboration with WAMU, the Investigative Reporting Workshop and Reveal News. The radio documentary and written ...

A D.C. lawmaker floated a bill Tuesday that would raise the standards police must meet to carry out search warrants and require the city to pay for property damage when officers raid the wrong houses.

D.C. Council member David Grosso (I-At Large), the bill’s sponsor, said the measure was designed to prevent erroneous searches and give residents a clear course of action if police mistakenly raid their home.

Grosso said the bill was a response to a Washington Post investigation of 2,000 search warrants that found 284 cases in which D.C. police searched homes for ...

New training shows officers how to 'calm things down'

In today’s Washington Post, reporter Kimberly Kindy examines a new kind of training for police recruits near Seattle, in which officials say they are determined to produce “guardians of democracy” who serve and protect — instead of “warriors” who conquer and control.

Ashley Balcerzak, a master’s student at AU, Workshop intern and in the practicum taught by John Sullivan at the Post, researched a section on how police weapons have changed. She also helped to fact-check the story and then wrote in more detail about what she learned in “How the police duty belt went from Officer Friendly to ...

The Investigative Reporting Workshop, WAMU 88.5 News and Reveal collaborated on "Assault on Justice," a five-month project investigating the use and possible overuse of the charge of "assaulting a police officer" in the District of Columbia.

The Workshop, a nonprofit news organization based at American University, and WAMU 88.5, the local NPR affiliate owned by American University, previously co-produced "Dollars & Deals," which looked at how DC City Council members, who vote on city contracts worth more than $1 million, are raking in campaign contributions from many of those same firms.

This is the first collaboration among all three ...