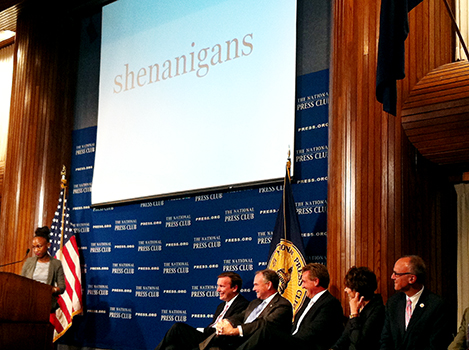 The nine journalists on the media team were quick to point out, however ...

Journalism nonprofits filling in the void

In the past decade, newsrooms have lost nearly a third of their staff due to drastic decreases in advertising revenue, and journalism nonprofits are stepping up to fill in that void.

“We have this very strange landscape today where we have more than two dozen (journalism) nonprofits across the United States and they are proliferating like rabbits,” said Investigative Reporting Workshop’s Executive Editor Charles Lewis at the National Press Club this morning.

CJR: Nonprofits 'moving from the margin'

Some predict commercial media will give up altogether on pricey investigative reporting and that nonprofits will continue to take a more prominent role in journalism.

Workshop Executive Editor Charles Lewis, who has founded four nonprofit journalism organizations, will be on a panel Monday at the National Press Club speaking about how to excel in this new media landscape.

He is quoted in the most recent recent issue of the Columbia Journalism Review about what he refers to as the "emerging ecosystem of investigative reporting."

The CJR piece, by reporter Jill Drew, looks at how nonprofit journalism is breaking new ground ...