Romina Martin, 20, was just a child when her mother left Peru for the United States.

She doesn’t remember much about the years her mother was gone, only that Martin lived sometimes with her grandparents and sometimes with other relatives. Martin eventually joined her mother in Maryland in 2006 as the child of a permanent resident.

“A piece of paper does not define your humanity, your worth or your contributions to the growth of this country,” said Martin, who says she has family members who are undocumented and have been separated this summer.

Martin was one of more than 30,000 people who turned out in Washington, D.C. on June 30 to demand the Trump administration end family separation at the border and reunite families immediately. In heat that reached the high 90s, protesters spilled into Lafayette Square, across from the White House, chanting “Abolish ICE” and “families belong together.”

In recent weeks, more than 2,000 children were separated from their parents at the U.S.-Mexico border. After an increase in illegal border crossings, Attorney General Jeff Sessions introduced a zero-tolerance policy that took effect in May that prosecutes anyone entering the U.S. illegally. 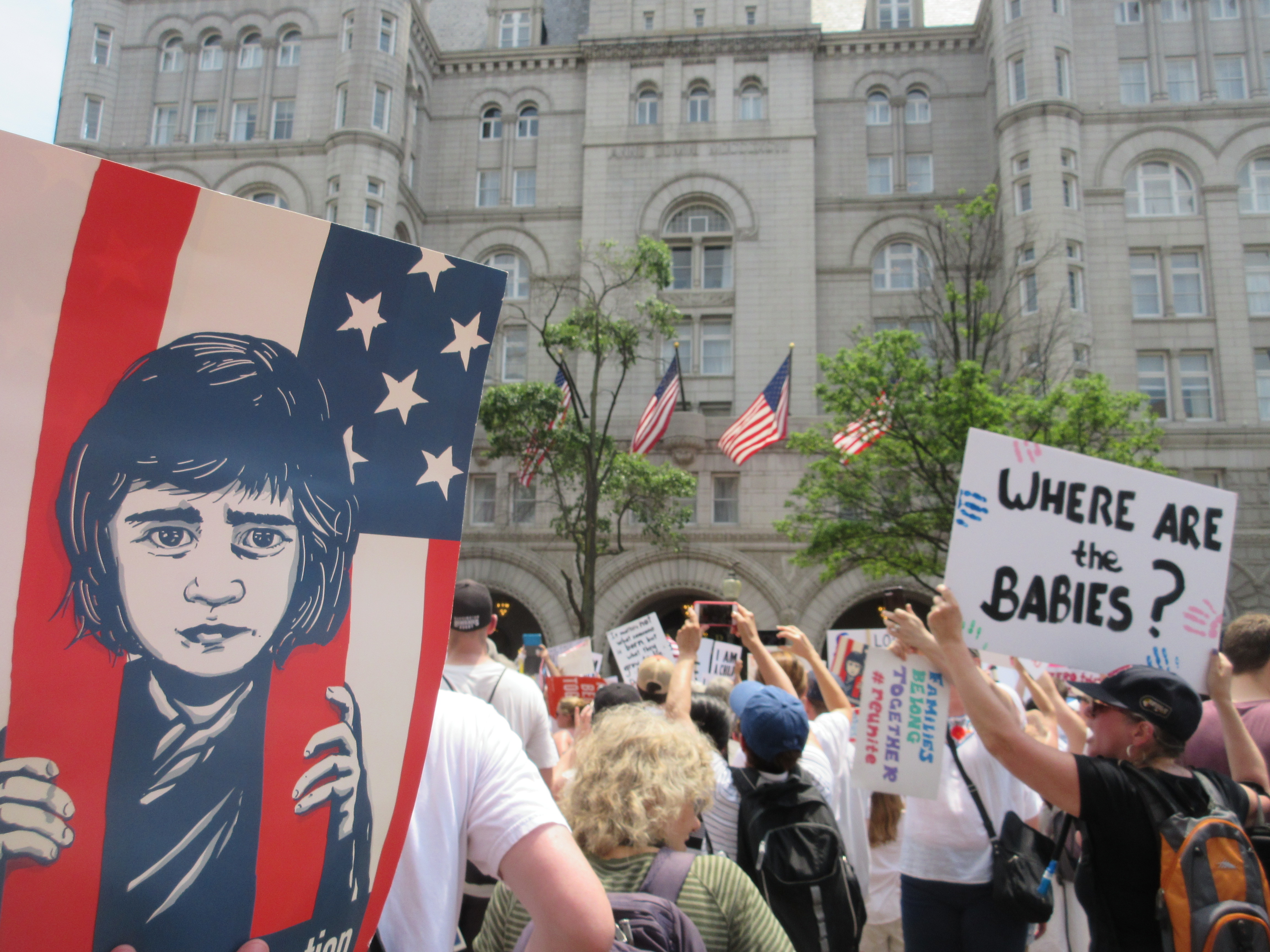 An immigration rally on June 30 drew 30,000 people to Lafayette Square.

After public backlash, President Donald Trump signed on June 20 an executive order ending family separation at the border. The plan is to keep parents and children together at detention centers, while continuing to criminally prosecute the adults.

That plan fell short for many of the protesters like Antonia Surco, 67.

“I'm here standing in solidarity, supporting the youth and those that are incarcerated and separated from their parents," Surco said. "He's interfering with the dignity of children.”

The government as of June 20 had 2,053 "separated minors" in custody and another 522 children had been reunited with their families, according to a U.S. Department of Homeland Security statement.

On June 26, U.S. District Judge Dana Sabraw ordered the Trump administration reunite immigrant parents and their children within 30 days. The injunction also required by July 10 that the 102 children under the age of 5 be reunited with their parents.

While the government has begun to reunite families, the administration missed that deadline, according to the ACLU.

Sabraw asked an American Civil Liberties Union attorney to prepare a proposal of possible sanctions if the children were not reunited. He refuses to grant the government any extensions and expects an update on when the remaining children will return to their families.

Now the government has a second deadline to meet. All other remaining children — more than 2,000 of them — have to be reunited by July 26.

That didn’t sit well with Martin who said the administration's zero-tolerance agenda is “Unchristian like.”

“This policy is not made with love,” Martin said.

She remembers the challenges of adjusting to the English language and American food while she worked to rebuild a relationship with her mother. Early on, she said she experienced discrimination for her strong accent and Peruvian features.

At the June 30 rally, Martin marched, she said, to stand in solidarity with her community members who live in fear.

Martin, who studies law and society at American University, hopes to become an immigration attorney and advocate for others like her to have the same opportunities she was afforded. She explained how receiving a visa to come to the U.S. from Peru was by “sheer luck.” She was denied at the U.S. Embassy in Peru twice before receiving a visa on the third try.

“As an immigrant, it is my duty to fight for my community,” Martin said in a recent phone interview. “I don’t know what extent my mom would have risked to coming here, but it could’ve been me. It could’ve been my mom.”

You can learn more about immigration under the Trump administration at our timeline here.