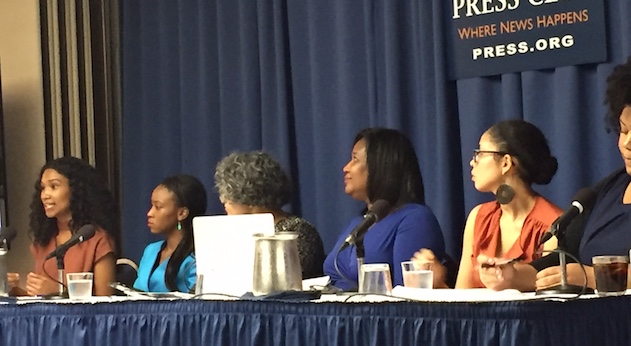 CNN’s footage of black people rioting and looting to protest the fatal shooting of a black man by a white police officer in Ferguson, Missouri, prompted Kendra Hatcher King to initiate the study.

Despite other peaceful protests in Ferguson, negative images are what stick with viewers, Hatcher King, vice president of marketing engagement at advertising firm SapientRazorfish, said.

“It’s, ‘look at these people, and I’m afraid, and I should be afraid, and I deserve any treatment I get,’” said Hatcher King at a panel at the National Press Club on Thursday.

Hatcher King, the American Advertising Federation and the historically black sorority Zeta Phi Beta Sorority commissioned two studies — this was the second — to dig deeper. The University of Missouri’s School of Journalism surveyed more than 500 women for the report, “From Bad Girls to Housewives: Portrayals of African American Women in the Media.”

Connie Frazier, COO of @AAFNational kicks off Changing the Narrative: Depictions of African American Women in Advertising & the Media pic.twitter.com/LPfcZkxI5T

Other panelists said some TV shows are including more female African-American leads, but they’re not necessarily positive portrayals.

Erin Horne McKinney, founder and CEO of Black Female Founders, said, “We’re in such a great time of black-girl magic. It’s not the best portrayals of us, but they’re multifaceted.”

Still, TV and movie producers make content that has proven to sell in the past, said Dana Gills, a film producer at LionsGate Entertainment.

“The only color people in this industry care about is green,” she said. “We have to do a better job as consumers to show up to support the things we want to see.”

Being vocal on social media can also help dictate what TV shows and ads get made, said Candace Queen, founder of Blacks in Advertising, a group that aims to empower black advertisers.

The panel fell during the Congressional Black Caucus Foundation’s Legislative Conference, which looks at issues impacting African-Americans and the global black community.

The advertising federation also published a white paper called Reality TV: Entertaining, but no Laughing Matter. The paper looked at how portrayals of blacks on reality TV affect public perception of blacks.