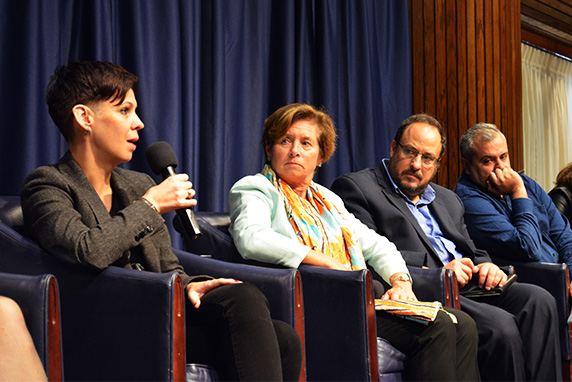 Natalia Kaliada speaks about her role in the Belarus Free Theatre.

Most of the West enjoys freedom of expression and media, but several artists from oppressive countries warned an American audience not to take their freedom for granted at an event at the National Press Club on Oct. 28.

Dissidents from Russia, Syria, Iran and other countries said their fight for freedom of expression is inextricably linked to freedom of others around the world.

“Just exercise your freedoms while you have it,” Natalia Kaliada, co-artistic director of the Belarus Free Theatre, said. “Otherwise they will be gone.”

Kaliada referred to the current political climate in the United States as the “beginning of a battle,” and urged action on behalf of other artists, dissidents and the media alike.

If an artist is not supported by the international community it is easier for a government to act against her — and opens up the doors for other countries to crack down on dissidents as well, Kaliada said.

“It is important here not to wait for a moment where your friends are being killed,” Kaliada said.

The complacency of the West was a similar theme for several of the presenters at Saturday’s event, “Burning to Tell You: Critical Conversations with Risk-Taking Artists,” sponsored by the Laboratory for Global Performance and Politics.

Iranian author Azar Nafisi said suppression of the arts and media occurs anywhere oppression happens, and many democratic countries are suppressed by indifference at the moment.

Many of those who participated in the event were from countries where pushing political boundaries often leads to jail time: Maria Alyokhina, a member of Pussy Riot collective in Russia; Nik Kowsar, an Iranian-Canadian cartoonist; and Kaliada all told stories of being arrested for the art they created.

“We have freedom of speech,” Kowsar said, speaking about Iran. “What we don’t have is freedom after speech.”

However, the fear of retaliation from the government was not enough to keep any of the artists quiet and only solidified their determination to speak out, they said. Kowsar called his art, and the suppression of it, political “pressure” that leads to change. Without his and others’ voices, the crimes of regimes like the one in Iran would go unheard and therefore unchanged, he said. 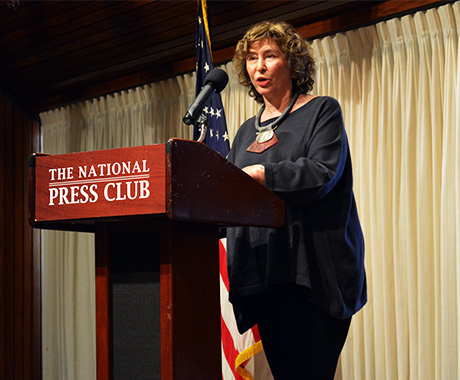 Azar Nafisi closed the event saying that no country is completely safe from artistic suppression and censorship.

In her closing remarks, Nafisi said artists’ ability to tell the truth gives them power to expose injustice and promote change, making the freedom to express their art vital in improving the lives of people living under oppressive regimes.

“What is it that makes them so scared of a person with a pen?” Nafisi asked. “The reason is truth.”