In preparation for the September premiere of PBS’s new documentary series on the Vietnam War, directors Ken Burns and Lynn Novick talked Monday night at the Newseum about the importance of both press freedom and finding humanity during one of America’s darkest and most divisive wars.

“The Vietnam War,” 10 years in the making, stands to be the most comprehensive documentary film ever made about the war.

Newseum members and guests filled the Walter and Leonore Annenberg Theater to watch film excerpts focused on media and war reporting from the 10-part, 18-hour series, then listened to a conversation and Q&A with the directors, facilitated by retired CBS reporter Bill Plante. 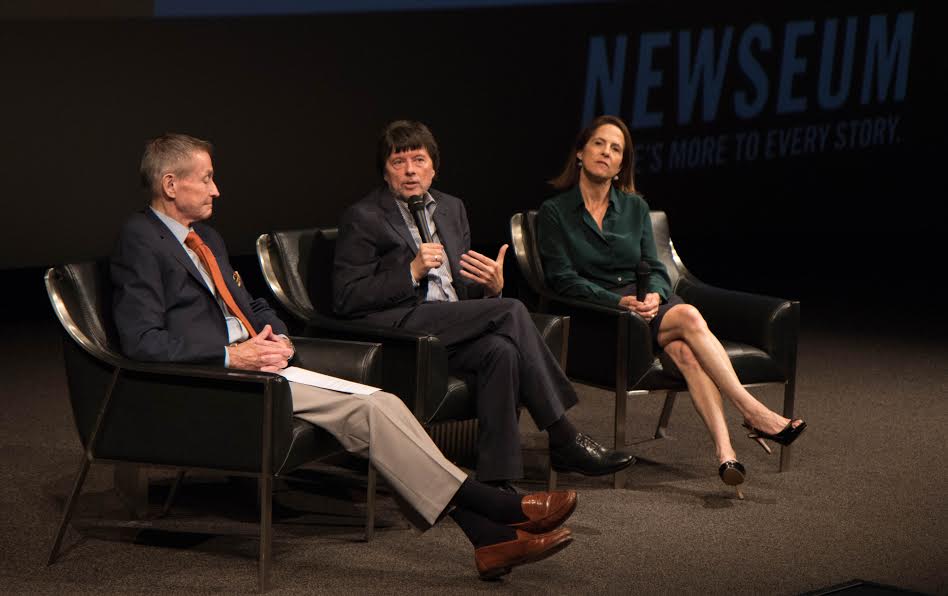 From left: Bill Plante, Ken Burns and Lynn Novick talk about their upcoming PBS documentary on the Vietnam War.

Burns, dubbed by colleagues as “America’s foremost storyteller,” tackled the Vietnam War project with frequent collaborator and producer Novick. Together they have made monumental films like “Baseball: The Tenth Inning” and “Prohibition,” winning Primetime Emmys for each.

In their latest project, the filmmakers hope to start a national dialogue about the war and what it means in its historical context. Burns calls the Vietnam War the “most important event of the 20th century,” and draws parallels between the war and our current political climate.

“The biggest mistake we make when we think about the Vietnam War is we think about ourselves,” Novick said of the American perspective. “It’s very hard to talk about because we can’t agree on what happened.”

Interviews with nearly 80 subjects, including U.S. veterans, war correspondents, former Vietcong, protesters, civilians and prisoners of war, help to tell the complicated and divisive story of the war from multiple perspectives.

These accounts are cut over rare archival footage and photographs in what many recognize as the classic Burns style.

Burns is the director of more than 30 documentary films and series on subjects as diverse as jazz, the Roosevelts, cancer and the Central Park Five. He has received four Emmys, a Peabody Award and nominations for two Academy Awards. He is the recipient of more than 20 honorary degrees, among other honors.

With the event’s focus on the media and war reporting, the screening Monday night told stories about the Pentagon Papers leak, the embassy attack in Saigon, North Vietnamese propaganda and the journalists who brought the war to life on American television each night.

Present throughout the presentation were the themes of humanity, bearing witness and vigilant citizenship.

Plante, who reported on the Vietnam War early in his 52-year CBS News career, asked the filmmakers how reporting on the war felt in the current political climate. Burns and Novick agreed the project seemed timely when they began production in 2007, and the parallels since then have only grown more apparent.

Novick said today reporters do not have the same access journalists like Plante, Neil Sheehan and Morley Safer had during the Vietnam War, and that is a problem for the public, which needs access to on-the-ground reporting.

“When you begin to realize the definition of 'us' is so tied to this thing we always do, which is go to war, you realize how important it is to talk about it,” Burns said.

Burns stressed the importance of public media, saying their project and Monday's discussion would not have been possible without the support of PBS. Together, Burns and Novick have produced two other war PBS documentary series, “The Civil War” and “The War,” about the second World War.

“Ken and Lynn have been behind some of the most important documentary films ever shown on television, films that have, in fact, made television history and created national conversations around who we are as Americans,” Beth Hoppe, chief programming executive for PBS, told the crowd.

For a preview, go here.