Journalists have taken a beating in 2017 — literally and verbally — but the Pew Research Center’s annual State of the News Media report, released last week, may have provided some relief.

Well, at least for the so-called “enemies of the people” who happen to work for a cable news channel or one of the country’s top newspapers.

For those organizations, Pew’s report seems to support the “Trump bump” phenomenon — an increase in viewership or web traffic in the lead up to and aftermath of the 2016 election.

Or as New York Times CEO Mark Thompson told CNBC, the Trump administration has provided the newspaper with “rocket fuel in the subscription business.”

(Meanwhile, Trump has repeatedly referred to the Times as “failing” and “fake news.”)

Particularly striking, said Pew research associate Mike Barthel, was the increase in cable news viewership: an average prime-time audience of nearly 4.8 million in 2016, up from about 3 million the year before.

“The magnitude of the increase was definitely notable,” Barthel said in an interview.

The 2016 prime-time audience numbers are the highest Pew has recorded since it began keeping track in 2004. It’s not unusual for ratings to spike during an election year, Barthel said, but this election brought a larger increase than years past. (From 2007 to 2008, prime-time viewership increased by about 1.2 million, perhaps attributable to an “Obama bump.”)

The country’s largest newspapers also experienced a boom — though not as dramatic as cable news — with The New York Times, The Wall Street Journal and The Chicago Tribune each reporting a sharp increase in digital subscriptions. In its yearly financial statements, The Times, specifically, added nearly 500,000 digital subscriptions in 2016, a 47 percent year-over-year rise. Barthel said these numbers are “strikingly high.” 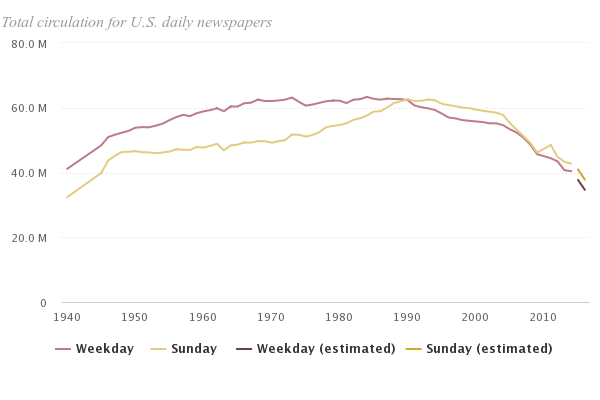 But for the newspaper industry as a whole, Pew’s numbers don’t offer much comfort.

Even as the leading American papers racked up digital subscribers, circulation industry-wide remained mired in a decades-long decline. 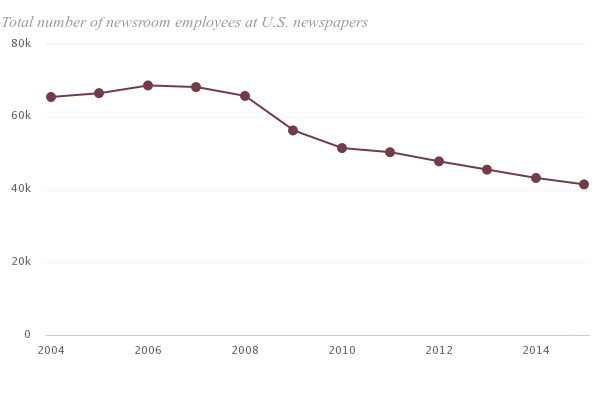 Pew researchers added a caveat to these circulation numbers: because The Times, The Journal and The Washington Post do not fully report their digital subscriptions, Pew either estimated or omitted them from their overall calculations.

This continued fall in circulation also coincides with two more recent trends: a drop in advertising revenue and the total number of newsroom employees. In 2005, total ad revenue was nearly $50 billion, an all-time high, and there were about 70,000 people working in newsrooms.

This year, Pew is changing the way it releases its State of the News Media reports. Instead of the hundred-some-page reports it has issued in the past, the center will release a series of fact sheets, sector-by-sector. The two published last week, the reports for newspapers and cable news stations, were the first in this series. The Workshop will follow these reports as they’re released in the coming months.