Journalism in the Trump era 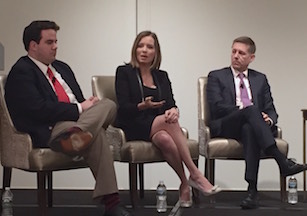 From left: Robert Costa, Kristen Soltis Anderson and Trevor Thrall talk about the challenges of covering the new Trump administration.

Donald Trump spared no time battling the American media. Not only did he call the media “dishonest” the first day after taking office, but Sean Spicer, his press secretary, held the first briefing to accuse the media of “deliberately false reporting” on the inauguration’s crowd size.

“In America, the president reigns for four years, and journalism governs forever and ever,” said Nikolav Malyarov, the moderator of one of PressReader’s forums on political coverage, reading Oscar Wilde’s famous quote to open the hard-hitting discussion at the Fairmont in Washington recently.

PressReader, a Canadian-based news community that offers all-you-can-read news access to newspapers and magazines around the globe, hosted the event.

“I think it’s really a good time to be in journalism,” said Ashley Codianni, director of social publishing at CNN. “We’re really packaging news and putting news in places everywhere the audiences are. So if you’re not watching cable news, that’s fine, because we’re everywhere.”

Codianni said the pressure to be first is there but doesn’t surpass other considerations.

“We’re really taking our time before we publish or show you anything, because debunking is part of it now, ” Codianni told the crowd of reporters and journalism students at the event. Rick Klein, political director of ABC News, concurred, and emphasized that reporters have been fact-checking government and political statements.

Still, not all those on the panel were optimistic.

Robert Costa, a national political reporter at The Washington Post, said he found the international political press disoriented and having a hard time grasping that an unconventional and non-traditional candidate is now in power.

“That disorientation. I think it has alarmed the press, to an extent often as much as everyone trying very hard to be aggressive and to give the new administration scrutiny, we’re almost always off-kilter where we’re not really on the ball at times because everything is so visceral and so different,” he said.

“I think the challenge for us now is not only to be obsessed with fact-checking, but to make sure we’re fact-checking as aggressively as possible,” he added.

The seasoned political reporter reminded the panelists that it had only been a week since Donald Trump took office and a lot of people at different newsrooms were already concerned, especially after President Trump's chief White House strategist Steve Bannon called the media “the opposition party” during an interview with The New York Times last month.

Cato Institute Senior Fellow Trevor Thrall said the media have yet to figure out a way to cover President Trump because he is so different from any of his predecessors.

“So the fact the president isn’t obeying the conventions of how the president talks is throwing you guys into a complete tizzy, whereas the rest of America doesn’t have any trouble understanding Trump,” Thrall said. “They talk the same language.”

What policies or changes would those covering the president introduce to the news industry in order to develop new audiences?

ABC’s Klein said he would like to make changes in another direction.

“I would require all of my reporters at my news organization to have one …workday a week where all the reporting they do is person-to-person, nothing electronic,” Klein said.

As much as Codianni acknowledged the importance of human interaction, she said she would like to rebuild local connections.

The panelists also touched on the lack of time and flexibility in many newsrooms.

“Every day is like 10 things a day,” Costa said. “Stuff that would be a month-long news story is not even getting covered.”

“Trump’s style, boom, boom, boom. Every minute it is a tweet,” Costa said. “You don’t wanna wake up in the morning. What is he tweeting at 5 a.m.? What’s gonna happen today?”

“I hope that journalists will hold this administration’s feet to the fire,” said Kristen Soltis Anderson, a columnist with the Washington Examiner and Republican strategist and pollster.

Klein pointed out that a lack of unified definition of journalism stood in the way of regaining public trust.

Anyone can call himself or herself a journalist, Klein said, and some of them don’t check the facts.

He said even the way Trump tweeted before the presidential campaign could be considered a form of citizen journalism.

Thrall brought up a lack of transparency as another issue in terms of re-establishing public trust, and Klein proposed social media platforms could help solve that.

“If you care enough to check the reporters’ Twitter feed,” said Klein, “you’ll find now a little about the reporter, about who the reporter's in touch with, about the stories the reporter has done on the same topic. This is a wealth of information.”

“We’re not objective. Why don’t we just admit it?” asked Timothy Maier from the audience.

The executive editor of Talk Media News, who has worked for nearly three decades with a variety of news organizations, said, “Let’s face it, we missed this election. I think we completely missed something that is going on with this country.”

Maier asked, “What do you think personally we can do to get that faith in polling back so they believe and trust us?”

Part of the problem, Costa said, is “the media talk about the media too much.”

In addition, he said, "... you don’t actually need to be in a transactional relationship or a good relationship with the source,” referring to the media’s reaction to Trump’s decision to move the press briefing room out of the West Wing. “You can be totally on the outside and still cover it.”

Still, as he said earlier in the forum, “It’s going to be a long four years, and every day is an alarmist situation for the press.”