Longtime Washington Post reporters Michael Kranish and Marc Fisher said most of their 20 hours of interviews with Republican presidential candidate Donald Trump took place in his lavish Trump Tower office in New York City with a grand view of Central Park. They described those encounters and their reporting to a full house at The Washington Post recently, where they talked about the presidential candidate and their new book,  “Trump Revealed: An American Journey of Ambition, Money, Ego and Power,” (Scribner, 448 pages).

As they watched his campaign unfold, Kranish and Fisher developed a more all-encompassing story about the real estate tycoon and reality TV star. They drew on those interviews and also the work of a team of reporters, researchers, editors and fact-checkers to weave a compelling narrative of Trump’s life, delving into his playboy image, his failed businesses, his upbringing, his three marriages, and, of course, how he became the GOP’s nominee for president of the United States. 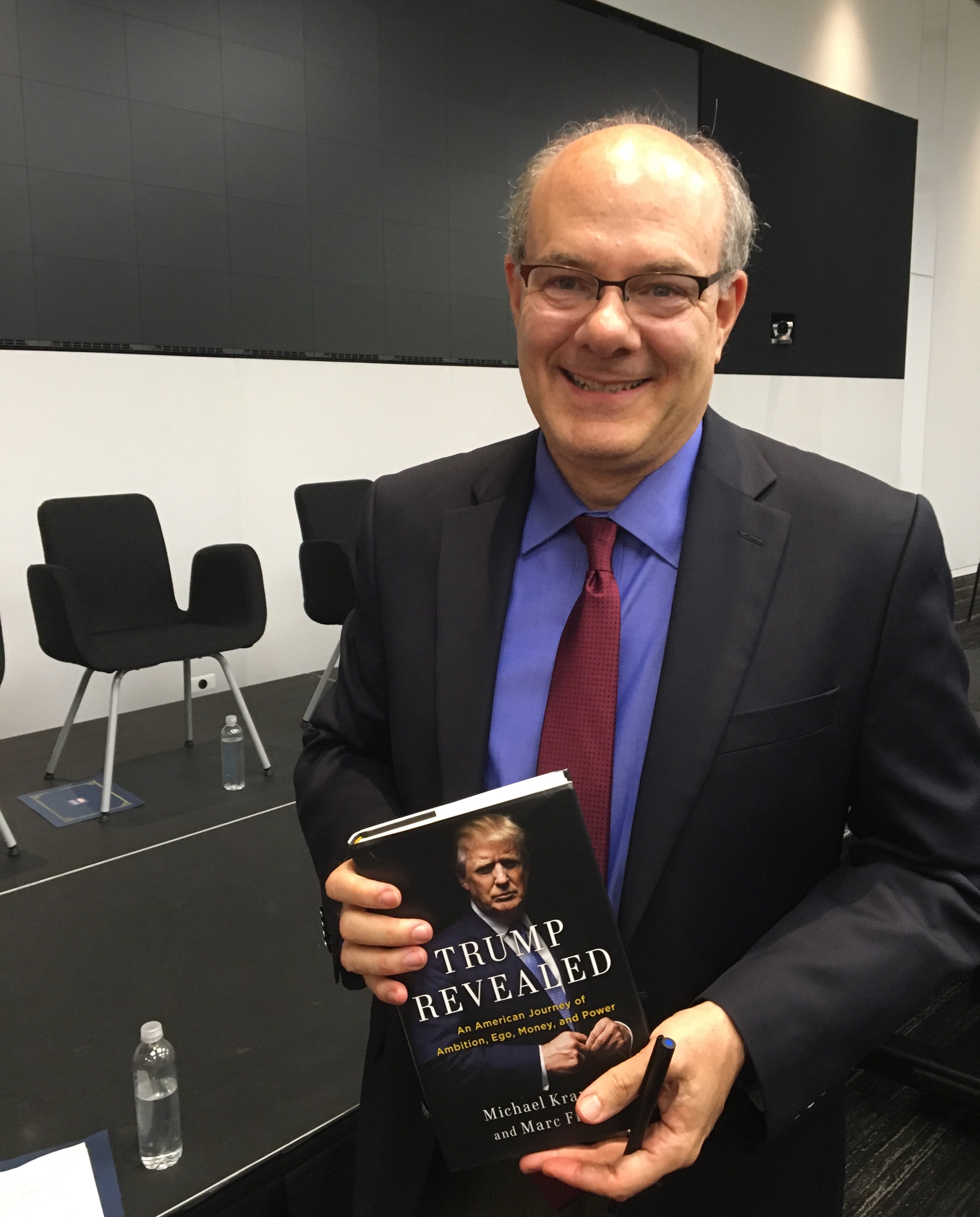 Marc Fisher poses with his new book, a collaboration with colleagues at The Washington Post.

The ticketed event at the Post auditorium was moderated by Fisher, now a senior editor who has been at the Post for three decades and reports on a wide range of subjects. His co-author, national correspondent Michael Kranish, joined reporters Mary Jordan, Robert Samuels and Bob O’Harrow on the panel.

The Post also has published their research materials in a reporting archive on the Post’s website, offering readers a firsthand look at the 408 documents used for “Trump Revealed.”

Fisher said that during their many in-person interviews, Trump was courteous and generous with his time but had trouble sticking to one point. As often seen on television, Trump tends to veer off-topic, Fisher said. “It’s difficult to have a linear conversation,” he told the audience.

Fisher added that Trump "doesn't think deeply into things,” but rather prefers to be spoken to and to reach a decision in seconds. The panel discussed how this was a concerning characteristic for the country’s potential future commander in chief.

“He says a sentence or two and then he’s on to something else,” Fisher said. “He’ll all of a sudden start talking about his TV ratings.”

Jordan, a national correspondent, covered the women in Trump’s life, looking into his previous marriages to Ivana Zelníčková and Marla Maples, and his relationship with wife Melania Trump. Jordan interviewed a Trump attorney who discussed the “playboy image” he maintained while single. The Post also published Jordan’s article about Melania Trump, and her general “disappearance” from public view after her speech at the Republican National Convention in Cleveland drew heavy criticism.

“If he wins, she is the first lady of the United States; she has an office in the White House; she has a public platform,” Jordan said. “And she has literally gone silent.”

Jordan added that it was unusual for a candidate’s spouse to be so quiet “in the homestretch of a presidential campaign.”

Fisher and Kranish said that while Trump’s children were often in and out of his office during interviews, the potential first lady was largely out of the picture.

When the evening opened up to questions from the audience, Jordan touched on Trump’s temper.

“Americans like what they see on TV,” Jordan said. “His temper and confidence might be what appeals to voters.”

But some questioned Trump’s credibility and the media’s responsibility to hold him accountable. Panelists said that although Trump banned Post reporters from his events this past summer, the news organization continued to cover his campaign and investigate his claims.

"It's hard to believe sometimes that he means what he says," said Robert Samuels. The reporter said the candidate’s passion has a lot to do with whether the public trusts him.

Emma Rockway of Maryland attended alongside Allison Goff, who lives in the District. Neither had read the book, and neither said she will support Trump this fall. But both said the authors painted a broad, honest picture of the candidate.

“They covered it in a very holistic way,” Rockway said.

“They had a lot of different perspectives from actually talking to Trump and what the actual interaction is like,” said Goff, “to how he ended up running for president.”