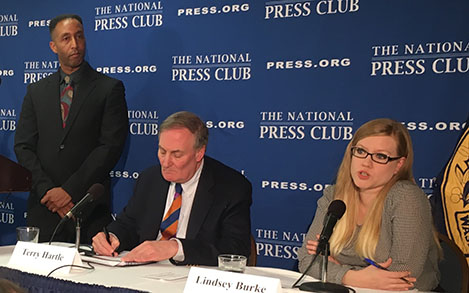 These questions were among several hot topics discussed by an expert panel this week at an event sponsored by the Education Writers Association.  Just days after Trump’s historic win, the panel of both journalists and public policy experts tackled issues ranging from preschool to college in an attempt to discern what the future of education will look like during the next four years of a Trump administration.

Hendrie, noting that after last week’s election nearly two-thirds of governorships and 70 percent of state legislatures are now in Republican control, predicted that many Obama administration education initiatives could be in their final days.

So what education-related issues should journalists have on their radar?  We break them down for you below.

Elimination of the education department

Despite some conservatives’ hopes, Trump isn’t likely to use his political capital to eliminate the federal Department of Education.  Trump’s administration could, however, shrink the department’s size in an effort to scale back its power.

“Killing a cabinet agency is a huge lift,” said Terry Hartle of the American Council on Education.   “You can kill something outright, or you can starve it.”

Vic Klatt, who works on education policy for Penn Hill Group, said he’s worked on bills to end the Education Department before and it’s mostly for show.  Trump, he said, will likely follow the lead of Congress toward creating a more balanced state and federal partnership.

Reauthorization of the Higher Education Act

The national law regulating American colleges and universities hasn’t been reauthorized since 2008, and both Republicans and Democrats have indicated that renewed attention to the $150 billion per year legislation is past due.

David Cleary, chief-of-staff to Sen. Lamar Alexander (R-Tenn.), said reauthorization of the Higher Education Act is a top priority for his boss, the chairman of the Senate Health, Education, Labor and Pensions Committee.

Higher education, however, may not be on the top of President-elect Trump’s legislative wish list. Immigration reform, tax cuts and a repeal of the Affordable Care Act will all take higher priority, Hartle said.

Cleary said he was hopeful for a reauthorization within the next two years, especially given the successful track record of Alexander and his Democratic counterpart, Sen. Patty Murray (D-Wash.), in reaching bipartisan compromise.

“It’s not something you can do alone,” Cleary said.

Rising college costs, which gained attention during the presidential campaign due in part to Democratic primary candidate Sen. Bernie Sanders’ focus on the issue, struck a chord with millennial voters who feel buried in debt.  Trump has said he would work with Congress on lowering costs and put forth a plan during the campaign in which he would first put pressure on colleges with large endowments.

Lindsey Burke of the conservative-leaning Heritage Foundation said another possibility is to eliminate federally subsidized loan programs and to encourage private lending.  Unlike the government, Burke said, private lenders could take into account factors ‚ such as college majors,  that could affect students’ ability to repay their loans.

With the issue of college affordability not falling along clear partisan lines, lawmakers could choose to take incremental steps in tackling the problem.

The challenge, according to Cleary, is that “Congress always wants to do all or nothing.”

Panelists agreed that a rollback on regulations and oversight of for-profit colleges is likely during a Trump administration, some noting the President-elect is facing his own lawsuit for allegedly fraudulent marketing practices at Trump University.

Weakened oversight “will expose millions of students to the predations of for-profit colleges,” warned Kevin Carey, the director of education policy at New America, a nonpartisan think tank.

With Democratic candidate Hillary Clinton’s loss to Trump, the prospect for widescale reform was lost, as well, said Carey.  He urged reporters to remain vigilant in their coverage of fraudulent claims against for-profit colleges.

“Most important will be what we don’t see,” he said.

Hate speech and protests on campus

More than 200 incidents of election-related harassment and intimidation have occurred across the country since voters took to the polls last week, according to the Southern Poverty Law Center.

“The tenor of the election isn’t going to change just because we have a definitive winner,” said Hartle.

From college campuses to high school hallways, students have reacted to hate speech — and Trump’s own campaign rhetoric — with walkouts and protests.

On the campaign trail last month, Trump defended students’ rights to free speech, but since his win has accused some protesters of being paid professionals (The next day, he appeared to walk that accusation back.).

Panelists didn’t expect the controversy to resolve itself anytime soon, and, with a Trump administration likely to pursue policy objectives at odds with many liberal-leaning college campuses, education reporters may be covering protests for the next four years.

“People who thought tensions or controversy would end the day after the election were, simply, out of their minds,” Hartle said.

More than 700,000 undocumented immigrants have received federal protection from deportation under the Obama administration’s Deferred Action for Childhood Arrivals (DACA) policy.  Panelists predicted that many students and teachers with DACA status could be affected if the Trump administration rescinds the policy.

As a part of DACA, the federal government has access to participants’ personal information, including where they live. Trump has vowed to deport up to three million immigrants but has focused his pledge on those who have committed crimes.

“We will need to wait and see what the administration does with the database,” Hartle said.

The Office of Civil Rights, a sub-agency of the Education Department, may be a target of the incoming Trump administration, panelists said.

Cleary called for the office to be “reined in” after eight years of expansion under the Obama administration.  During that time, the Office of Civil Rights pursued aggressive enforcement of student protections under Title IX, most recently advocating for the rights of transgender students.

Bethany Little of EducationCounsel maintained that there is a federal role in protecting civil rights and said it’s something Democrats will fight for.

Little questioned whether the Civil Rights Data Collection will be sacrificed, noting it contributes to transparency among the nation's elementary and secondary schools.

Trump has opposed The Common Core State Standards, a bipartisan initiative enacted to raise student achievement by standardizing what's taught from kindergarten through 12th grade nationwide. But in recent years the program has been heavily criticized by both the left and the right. The panelists said that, short of new legislation, President-elect Trump won’t be able to outlaw the controversial set of learning standards for students.

Trump’s choice for secretary of the Education Department could use the position as a bully pulpit against the Common Core, but the Trump has signaled that he may be open to appointing a cabinet head supportive of the standards.

A Trump presidency will likely be good news for the charter school community and other advocates of school choice, panelists said.  They questioned, however, where the money for Trump’s proposed $20 billion investment will come from.

Some have theorized that Trump has set his eyes on Title I funding, federal money dedicated to schools serving high-poverty populations.  The Obama administration proposed new regulations for Title I funds in late August, but it is unlikely, with Clinton’s loss, that they will be put into place before Trump takes office.

Controversial voucher programs — which allow students to use public money to attend private school — will likely get a boost of support from a Trump Education Department pursuing a school choice agenda.

Looking toward the new year

When the 115th Congress meets in January, change to education policy could be swift.

Cleary predicted that lawmakers will use the Congressional Review Act to strike down dozens of Obama administration regulations, many related to education.  Unlike other floor votes, only a simple majority is needed, and members of the Senate cannot filibuster.

The first predicted to go?  Teacher preparation regulations that have been highly unpopular with Republicans and teacher unions.

It is unlikely that President-elect Trump, whose inauguration is on Jan. 20, will oppose such Congressional action.