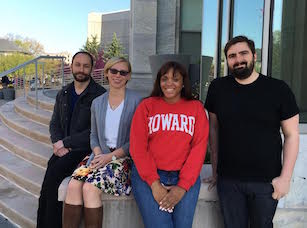 A new PBS/NPR investigation, "Business of Disaster," examines why thousands of residents of New Jersey and New York are still struggling three years after Superstorm Sandy devastated their communities.

NPR reporter Laura Sullivan teamed up with the PBS FRONTLINE production team — writer-producer Rick Young and associate producers Emma Schwartz and Fritz Kramer — based here at the Workshop and the School of Communication to take a deep dive into the nation’s disaster recovery system. Their reporting reveals major problems with the flood-insurance program and efforts to build more resilient communities.

This is the ninth co-production between Young and his team and the Investigative Reporting Workshop. Four students helped with research, reporting and acquiring rights to video footage and still photos: Daniel Farber Ball, Ashley Campbell, Taylor Harris and Anthony Brunner.

Harris is a senior at Howard University, and the other students are in graduate programs at American University. Farber Ball is earning a joint master's in the School of International Service and School of Communication; Campbell is in the journalism and public affairs program; and Brunner is in the MFA program in the film and video division. All also worked as production assistants over the last few months during interviews in Washington.

The new program will air nationwide on May 24.