Whatever you do, keep moving forward 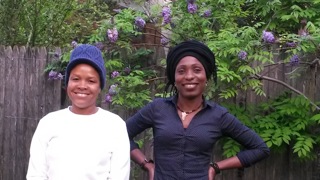 Wade Williams, left, and Nanythe Talani are returning to their home countries to use their new skills in multimedia and social media.

For the image on her new Twitter account, Congolese journalist Nanythe Talani features part of a quote by the Rev. Dr. Martin Luther King Jr.  “If you can’t run, then walk, if you can’t walk, then crawl, but whatever you do, you have to keep moving forward.”

As Michelle Obama and her daughters head out next week to Africa to urge more support for girls’ education, it’s a good moment to consider the personal journeys of two African women investigative journalists,  Nanythe (Na-NEETH) Talani, and her Liberian colleague, Wade (Wa-DEH) Williams. Their struggles and the challenges that lie ahead personify what the first lady’s trip is about. Obama’s first stop is Liberia.

Both Talani and Williams have just spent a transformative year at the University of Maryland on the State Department’s Humphrey Fellowships mid-career program, learning how they might improve journalism in their countries, discovering tools and techniques they are now eager to put into practice.

As they contemplate returning to Africa, King’s advice is on their minds. I spoke with both of them recently to hear more about what they learned in the United States, and what their countries need in order to develop a free and independent media.

Both come from small African countries that have suffered from years of war and instability. Liberia is the fourth-poorest country in the world, with a per capita gross national income of $370.  Thanks to oil, the French-speaking Republic of Congo (also known as Congo-Brazzaville) is further up the ladder at $2,720, but almost half the population there lives in poverty.

By the time they reached their teens, both women had experienced more trauma than most of us encounter in a lifetime. At age 9, in the midst of civil war, Williams became separated from her family. She managed to board a boat filled with people fleeing to neighboring Sierra Leone. Shortly before the boat arrived in port, it sank. Making it to shore, she spent the next seven years in foster care, returning to Liberia at age 16. She worked her way up from reporter to news desk chief as one of few women in the newsroom at the local paper FrontPageAfrica. In 2013, the government shut down the paper and imprisoned its editor-in-chief.

In 2014, Williams became one of the first journalists to report on Liberia’s raging Ebola epidemic, and continued to cover it non-stop for many Western news outlets, including the Associated Press, Bloomberg, The Guardian, Time.com, The New York Times and the Daily Beast, until it subsided.

Talani's youth and education were also punctuated by civil conflict. Close family members were killed. Her father fled the country, and she hasn’t seen him since. The university shut down periodically when the fighting came too close to campus. Earlier this year, the government shut down TerrAfrica, the Paris-based publication she worked for that did investigative stories.

In both Liberia and the Republic of the Congo, the media sector is fragile. Building and sustaining a viable media business  is a formidable challenge, as is withstanding government pressures on news coverage.

So, what lessons do these women bring home from their year here?

• The power of online journalism and social media: We take the Internet for granted, but many newsrooms in Liberia, Republic of Congo and other African countries lack even rudimentary Internet access (and sometimes electricity,) depriving journalists of the most basic research tools to get information and fact-check stories. Few people in Liberia or Congo-Brazzaville have smartphones.

In the U.S., Talani and Williams were able to explore everything the Internet, multimedia and social media have to offer. Williams created an online publication on Liberian politics with WordPress, and experimented with social media strategies to build an audience. Within two months she had attracted 30,000 readers in several countries, marveling at the lively discussions and feedback she got. She now hopes these strategies, seldom used in either Liberia or Republic of Congo, will help her publication gain traction.

“This could help me create a business model,” said Williams, “and help get more people engaged.”

Talani experimented shooting and editing photos and video. She started a Twitter account and learned how to engage her audience with it. She practiced doing radio spots at Voice of America.

• Data, polling and surveys: “The whole issue of data-driven journalism is something we’ve never seen in Liberia,” says Williams. Data, she said, can help raise people’s awareness and become the jumping-off point for investigations. With Liberian presidential elections scheduled for 2017, she says, “We need to find a way to put data where journalists can find it, or develop it ourselves.”

Williams also wants to do polling and surveys, tools almost never used by the Liberian media, to get a better handle on how the public sees key issues in advance of elections.

• Transparency, accountability and Freedom of Information: In both countries, even the most basic government data is frequently unavailable. Liberia has a Freedom of Information law but few know how to use it, and getting access to public documents is difficult. Their time in the U.S. has heightened both women’s awareness of the value of these laws.

Williams wants to cover topics like industrial pollution in Liberia’s capital Monrovia; the state of the country’s oil and gas industry; and the effects of coastal erosion on communities. She has explored possible mentoring and partnership arrangements with the U.S. Society of Environmental Journalists. Talani is eager to focus on wildlife protection, gender issues and indigenous rights.

• Training and internships: Neither woman had ever had an internship before coming to the United States.  They say their antiquated university media studies programs did not prepare them to work in a newsroom. Both have had to deal with untrained staffers who didn’t know the first thing about reporting. Now they are keen to improve university journalism curricula and establish internship programs to identify and attract better media hires.

• Ethics: Both women want to strengthen local journalistic ethics and independence, a challenge in countries where most journalists are underpaid and have come to expect cash in return for stories.

“People need to be taught the essence of good journalism, and about the whole issue of credibility,” says Williams.

Her time here provided a needed respite from reporting in Liberia. Several of the articles she wrote there raised hackles. When she broke traditional taboos to write about female genital mutilation, she received death threats. When she wrote about Liberia’s gay community, there were protests. After risking infection and death for a year reporting on the front lines of Liberia’s Ebola epidemic, she suffered from post-traumatic stress.

Talani has had her share of obstacles, and has also been threatened for reporting certain stories.

In Western countries, journalists can access various types of assistance to confront these challenges. In Liberia and Republic of Congo, you’re on your own.

Both journalists and their Humphrey Fellow associates at American University’s Washington College of Law had a session last month to prepare them for the culture shock they will face upon returning home.

“You will think things can be done quickly,” they were warned. “And people will think you have money.”

For Williams and Talani, however, more is at stake. Will they be able to practice journalism according to their own high standards and lead others? Will they be physically safe? Talani is worried. Political conflict has resurfaced in Congo Brazzaville, and the government has been arresting journalists.

Energized and apprehensive, they prepare to go home.