The power of images can make stories more memorable 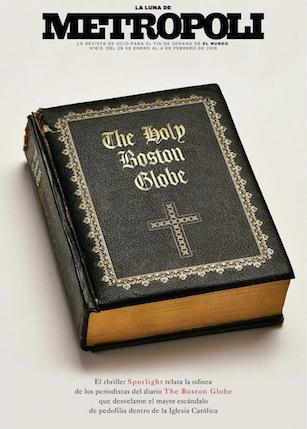 This magazine cover, designed to showcase the movie "Spotlight," was one of many creative covers from Metropoli in Spain.

“Spotlight” took center-stage in the journalism world after its release last year, and its Oscars for Best Picture and Best Writing and Original Screenplay guarantee that this movie will be viewed for years to come, at least by those of us in the profession.

What has been gratifying to me as well is to see college students appreciate the story behind the film, in which The Boston Globe's investigative team, Spotlight, used persistence and patience, documents and door-to-door reporting to get the story of the Catholic Church covering up child abuse by priests over many years.

And just as the film created new audiences for this Pulitzer Prize-winning newspaper series, so, too, have publication designers come up with new ways to best illustrate the importance of the movie.

The telling accomplishment of any strong visual is its ability to translate an idea almost instantaneously with an image, and the Spanish newspaper, El Mundo, and one of its magazines, Metropoli, did just that. When the longtime art director, Rodrigo Sanchez, spoke about what it takes to create exciting, non-literal and creative covers at the annual Society for News Design conference recently in San Francisco, he showed example after example of perfection. Included in that visual treat: The “Spotlight” idea, as seen here in its final form.

Like many of their magazine covers, the concept is powerful. Sanchez and his team take ideas from the sketch stage to finished product with in-studio photography (they don't use Photoshop) and freelance illustrations. Covers often include the creative use of typography. Many of the magazine's subjects are on the lighter side — movies, food and music are big topics — but Sanchez knows well the importance of setting the right tone.

His keynote address was his first appearance at SND since 1998, and his reflections beforehand indicate his deep interest in illustrating stories to invite readers in. As he told Tracy Collins and SND in a Q&A published before the talk, that means taking risks: "Metrópoli has been, and is, a big bank of experiments," Sanchez said.

"Every newspaper has niches of information where it is possible to experiment graphically," he said. "We have to build the newspaper as if it were a movie made of short films, with a lot of individualized stories but that all of them tell the story of a day. A particular day, unrepeatable, like the newspaper of that day."

Trying these creative ideas is what makes the publication stand out. And in the end, he said at the conference, "This isn't just design. It's journalism."