By Christina Animashaun and Mel Jones

As reporters, we’re always wondering, and hoping, that our stories have impact. Maybe a law will be enacted or improved, a high mark that everyone can see and cheer.  Sometimes impact is expressed in smaller ways — a neighborhood joins together to sort out what went wrong; someone shows concern by using his or her position to make changes; an official announces an investigation or a policy change.

We looked at three investigations in which we contributed research and reporting to Washington Post teams and found three different outcomes. And very real impact.

Here's what has happened since they were each published: 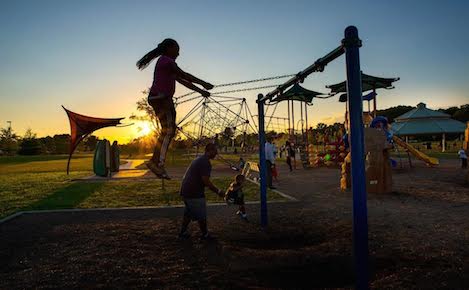 Children play in Fairwood Park located next to a shopping center in Bowie, Md. More than 1,000 acres of sprawling homes have evolved into a black utopia of sorts. The 1,800-home subdivision is among one of the richest neighborhoods in the richest black county in the United States. But the financial crisis of 2008 made Fairwood one of the hardest hit neighborhoods, with one in five homes going into foreclosure.

Students contributed to “Broken by the Bubble,” the second in this three-part series that focused on the drastic decline of wealth in one of the nation’s most affluent black communities, Prince George's County, Maryland. The series examined the impact of the foreclosure crisis and economic downturn.

The Post analysis revealed the effect of subprime lending: “Of the 1,441 loans made in Fairwood between 2006 and 2007, 416 were subprime, riskier loans that carry higher fees and interest rates that adjust frequently, according to federal home mortgage data.

“In the lead-up to the crisis, borrowers in Prince George’s earning more than $200,000 per year received subprime loans 31 percent of the time, the highest rate in the nation for a county where 750 or more subprime loans were made.”

Workshop Senior Editor John Sullivan, also on the staff of the Post, led our team of graduate researchers and interns. The students gathered court records and analyzed critical data needed for the story.

After the series ran, the People for Change Coalition, a local advocacy group, held an emergency meeting in Bowie, Md., which drew dozens of county residents. Washington Post reporter Arelis R. Hernandez described the February meeting as “packed with angry homeowners” who called for a task force to investigate the situation. County resident Yvonne Sneed said the article “awakened those who were sleeping.”

Hernandez reported that “homeowners discussed … building a fund or investor group to help neighbors; demanding more equitable distribution of funds from a national mortgage settlement; and legislation to change homeowner-association practices that are deemed unfair. The meeting was also an opportunity for neighbors to learn about the resources available to them through existing state and county programs for homeowners.”

Workshop interns and other students attached to the project through our partnership at the Post under the direction of Sullivan and Post reporter Kimbriell Kelly: Danielle DeCourcey, Justin Warren, Cathaleen Chen, Pietro Lombardi, Mariam Baksh, Mel Jones, Miranda Strong and Moriah Balingit.

Stop and Seize, published in September 2014:

This series last fall examined aggressive policing tactics with a specific focus on the practice of stopping motorists and taking cash found in vehicles without a search warrant or without charging them with a crime. The Post reported that since 2008, thousands of local and state police agencies have made more than 55,000 seizures of cash and property worth $3 billion under a civil asset forfeiture program at the Justice Department called Equitable Sharing.

The program has enabled local and state police to make seizures and then have them “adopted” by federal agencies, which share in the proceeds. It allowed police departments and drug task forces to keep up to 80 percent of the proceeds of adopted seizures, with the rest going to federal agencies, the Post found.

On Jan. 15, 2015, Attorney General Eric H. Holder Jr. announced that he would “bar local and state police from using federal law to seize cash, cars and other property without warrants or criminal charges.”

Grassley praised Holder’s decision. “We’re going to have a fairer justice system because of it,” Grassley said. “The rule of law ought to protect innocent people, and civil asset forfeiture hurt a lot of people.”

Post reporter Mike Sallah, who partnered on the series with Robert O’Harrow and Steven Rich, praised the contributions that students made.

“Their work not only allowed us to spend more time on front-line reporting, but they ended up identifying additional markers to show just how badly the program is being abused by state troopers and police,” said Sallah, who noted that students examined thousands of legal cases for the Post.

“I've worked with students from Columbia, Missouri and other schools, but the AU interns were among the best,” he said.

Doing well by doing good: The high price of working in war zones, published in May 2014

This project, written by Post reporters Scott Higham and Steven Rich, examined International Relief and Development (IRD), one of the largest non-governmental organizations to work in Iraq and Afghanistan. IRD has collected billions of dollars for projects from the U.S. Agency for International Development, and, in turn, also rewarded its employees with generous salaries and millions in bonuses.

In the succeeding 10 months, the Post has documented continuing problems with accountability at the organization.

Auditors for two federal agencies took a closer look at their use of confidentiality agreements, which former employees had to sign and which said that they could be sued for making disparaging remarks about the organization, including to “funding agencies” or “officials of any government,” which could violate whistleblower protections.

And the former chief of contracts for IRD was indicted on federal bribery charges for steering contracts to an Afghan subcontractor.

After the indictment, USAID suspended IRD from federal contract work. And most recently, the Post has reported that IRD dismissed numerous longtime senior executives for allegedly using taxpayer money for football season tickets, personal travel and meals, and alcohol at company receptions and retreats, according to current and former government and nonprofit officials.