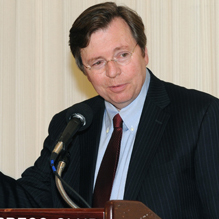 Charles Lewis, founding executive editor of the Investigative Reporting Workshop and professor at American University, is meeting and speaking with journalists in two cities in Germany this week about nonprofit investigative journalism. Founder of the Center for Public Integrity (1989) and its International Consortium of Investigative Journalists (1997), he was dubbed “the godfather of nonprofit investigative journalism” in 2008 by the PBS media blog MediaShift. Today in the U.S., there are now approximately 100 nonprofit news organizations, according to the Institute for Nonprofit News (INN), which Lewis co-founded in 2009 (until recently known as the Investigative News Network).

Lewis will speak in Magdeburg on Tuesday, June 16, about the future of nonprofit journalism, and in Berlin on Wednesday, June 17. He has been talking about nonprofit investigative journalism and related issues for more than two decades. In 2013 and 2014 alone, he spoke 56 times throughout the U.S. and in five countries (Byron Bay, Sydney and Melbourne, Australia; Rio de Janeiro, Brazil; Bogota, Colombia; Oxford and London, England; and Hamberg, Germany) on three continents.

His trip to Germany is sponsored by the Global Center for Journalism and Democracy (GCJD) at Sam Houston State University in Texas and hosted by the University of Applied Sciences, Magdeburg-Stendal (UMS) in Magdeburg, Germany. Other American journalists speaking at the day-long training conference in Magdeberg will include Paul Steiger, the executive chairman of ProPublica who served as its founding editor-in-chief, CEO and president from 2008 through 2012; Ayan Mittra of The Texas Tribune; and Patrick Cooper of NPR.

In Berlin, he will visit and speak to the staff and invited guests of CORRECT!V, which launched in early 2014 and is led by David Schraven. According to the organization’s website, “We are the first nonprofit investigative newsroom in the German-speaking world. Our goal is to give citizens access to information. We are one of the many answers to the media crisis. The old models of business are losing effectiveness. At the same time, journalists need to find better ways of explaining an increasingly complex world. Publishers are shutting down newspapers or cutting their budgets. Digital media has not been able to make up for this loss. The media has trouble fulfilling its watchdog role. CORRECT!V aims to change this: we want to make investigative and informative journalism affordable and accessible to media organizations throughout Germany.”

The Investigative Reporting Workshop will extend its tracking of the “new journalism ecosystem,” which began with published reports in 2010 and 2011, with a new survey project identifying and analyzing all of the known nonprofit investigative news organizations producing original content in the world, to be researched and written by Lewis and Pietro Lombardi, a Fulbright scholar from Italy who recently completed his M.A. degree at the American University School of Communication.