What Pluto tells us about journalism

When NASA's New Horizons spacecraft sent back its first crisp images of Pluto last week, the culmination of a 3-billion mile, 9 1/2-year journey filled with cliffhangers and near disasters, you didn't need to be a scientist to feel the exhilaration of discovering what was, until then, a dark and blurry corner of the solar system.

Lief will develop projects that connect scientists and journalists in her role at the Workshop.

Given my interests within research and media, I also thought about the lessons for journalism.

But this project has always been about more than science or media. It is also about making knowledge more widely available to the public, strengthening civil society and open government, and empowering ordinary citizens to observe and understand the workings of our own planet, why and how it changes and how to collect and evaluate information they can then use to make good decisions.

So, what are the takeaways for journalism from New Horizons?

•  Everything begins with an idea, and breakthroughs can take time. Twenty-six years ago, in 1989, a dozen scientists met at a Baltimore restaurant to discuss how to convince NASA to get interested in Pluto. It took 17 years and many twists and turns until the spacecraft launched in 2006. The history of science shows that sometimes the ideas outstrip the technologies needed to implement them. But once the technologies catch up, discoveries come pouring out.

• Be persistent.  There will always be obstacles. In 2000, with the projected costs of a Pluto mission skyrocketing, NASA pulled the plug. In a New York Times article last week that chronicled the saga, Alan Stern, the principal investigator, recalled that the NASA official who announced there would be no more “Pluto business” said, “It's over. It's dead. It's dead. It's dead.” Except it wasn't. The mission was resurrected and suffered near death several times more before launch.

• Improvise and problem solve. The Pluto mission became viable when scientists figured out how to lower the costs of building a spacecraft by ignoring conventional wisdom and building a smaller, simpler craft. That limited the number of instruments on board and used a boomerang maneuver around Jupiter, cutting four years off the travel time. In some cases, they had to completely rethink instrument design, like building a telescope lens out of material used for bulletproof vests to prevent distortions from extreme temperatures. 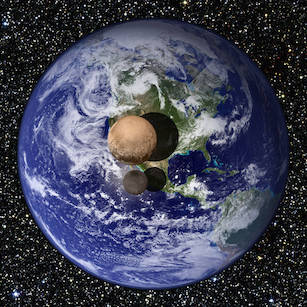 • Expect surprises. While the probe was on its long journey, the Hubble telescope discovered that Pluto had not the one moon they had planned for, but five, creating all sorts of new hazards. Computer crashes caused by cosmic rays occurred far more frequently than anticipated, and a major computer glitch occurred just days before New Horizons was due to receive its last, crucial instructions for the Pluto flyby.

• Answers to questions can upend assumptions and raise new questions. When the first Pluto images came in, a fraction of what will flow from the spacecraft over the next 16 months, scientists saw features they hadn’t expected and evidence of internal activity they couldn’t explain. There were mountains of ice as high as the Rockies, canyons six miles deep, vast plains that should have been cratered but weren’t. It was a much more diverse and complicated world than they had anticipated. Those few images upended assumptions that have long guided planetary studies, and will force scientists to look in new places for answers and explanations. Those little bits of preliminary evidence, though, will help tell them where to look.

• Things always change. As the tiny craft zipped through the cosmos, the world kept changing. Thousands of new planets were discovered, smartphones and social media became ubiquitous, the economy crashed and slowly recovered and the first African-American president was elected. Journalism continued to evolve.

It is in the media’s continuing evolution that I see the world of science playing a key role. I look at the students and interns here at American University’s School of Communication who are just starting out and wonder: How will they practice journalism five or 10 years from now? How will they answer questions about our world? What tools will they need?

I want to develop new collaborative journalism models that harness the scientific approach to discovery and apply it to and for journalism through interdisciplinary approaches.

As part of these models, I seek to involve the public, not as passive readers and viewers, but as participants in the act of collecting and creating data to address questions about issues they care about. More than one generation has grown up now using social media, curating their Facebook and Tumblr pages, shooting video, tweeting, building websites and blogging. They want and expect to have a say. They want to feel ownership of an issue; it’s not enough to hear about it. They must also experience it through doing.

Various journalism thinkers have similar ideas. CUNY professor Jeff Jarvis, in his new book, advocates implementing what he calls a “relationship strategy” to reposition journalism to be built around “listening to, understanding and then serving a community.” He writes, “The more valuable journalism and the services it provides are to communities, the more valuable those enterprises will be.”

Knight Visiting Neiman Fellow Melody Joy Kramer just published a report that calls on public media to build an infrastructure that would allow members of the public to contribute their skills and expertise to newsgathering operations as part of an effort to strengthen the bonds between public TV and radio stations and their communities.

To bring science into the journalistic equation beyond the science section requires that experts from different disciplines to get to know each other and find ways to work together. It’s no coincidence that these interdisciplinary approaches have often proven to be productive engines of ideas and problem solving for the researchers willing to venture beyond their specializations to view their work from a completely different vantage point. It's what IRW Executive Editor Chuck Lewis calls “tearing down walls.”

In a congratulatory message to the New Horizons team, the famous British scientist Stephen Hawking said, "We explore because we are human, and we want to know.”

I wholeheartedly agree. I would change that wording slightly, though, to say we need to know.