One way to constantly improve as a journalist is to observe and learn from the work of others. The May/June issue of Quill, the Society for Professional Journalists bimonthly magazine, included 85 examples of some of the best journalism from 2014. I read investigative journalism stories that debuted in print, broadcast and online formats. No matter the medium, I found the work to be incredibly detailed, insightful and informative. Stories relied on large data sets, public records and human voices to give an in-depth look at various issues from multiple vantage points.

Below are some examples that stood out to me, but for a complete look at this year’s winners visit the Sigma Delta Chi Awards page.

What happens to a police officer if he accidentally backs into a homeowner’s garage, wrongfully arrests someone or damages a water hydrant? According to the Knoxville News Sentinel, not much. The News Sentinel’s investigation revealed taxpayers in Knoxville and Knox County paid more than $1 million each year for “legal claims against public workers in a process that is largely hidden from public scrutiny.”

The News Sentinel also found that law enforcers involved in claims rarely lost their job, even if they “acted badly, violated someone’s civil rights or simply fouled up.”

You can view a PDF of the five-day series.

The San Francisco Public Press showed how income inequality plays out in a seemingly unexpected area: the parent-teacher association. With schools receiving less public funding in recent years, parent fundraising has stepped up in a big way: increasing 800 percent in 10 years. Schools in more affluent neighborhoods have more per-student funding available compared to schools in lower-income neighborhoods, widening the income gap. According to 2011 school district data, parents at 10 elementary schools raised more money than those at the other 61 schools combined.

Kayla Webley reported the story on students spurring desegregation at the University of Alabama sororities.

Marie Claire took a different approach in its investigation. The magazine used interviews and firsthand accounts of sorority members to better explain the impacts of unofficial policies that kept University of Alabama sororities segregated. While “African-Americans make up 12 percent of the Alabama student body, the administration did not spur the Greek system to integrate — students did,” Marie Claire's Kayla Webley reported. The piece used telling examples that showed how real discrimination was in the sorority scene. Eventually, university administration stepped in and mandated changes to the recruitment process, and by the spring semester the university said 21 African-American students had joined historically segregated sororities. 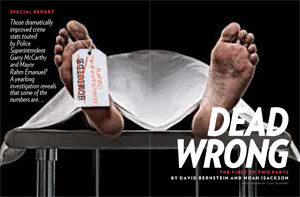 Chicago Magazine went beyond the headlines of the city’s rapidly-declining crime rates and showed that numbers aren’t as unbiased as they may seem. Chicago mayor Rahm Emanuel’s media blitz of sorts highlighted certain time periods that reflected dramatic crime reductions in the city. “April Fool’s Day marked the unofficial start of a new city tactic: inundate the public with crime-decline statistics,” according to the first part of the two-part report. Emanuel didn’t account for a decline in population that actually made the murder rate per 100,000 people higher than it had been in 1960, or about four times the current rate in New York City.

The magazine looked at crime statistics, interviewed criminologists and crime victims, and went through public records. Reporters found that crimes often were downgraded and reclassified or in some cases, made to disappear: “A house break-in becomes ‘trespassing’; a garage break-in becomes ‘criminal damage to property’; a theft becomes ‘lost property,’" according to the piece. A former lieutenant quoted earlier in the story referred to this process as the "‘speed wash cycle’: Major crimes are immediately rinsed out of the stat books.”

Buzzfeed showed the real effects of a law and how it plays out in reality. The multi-part series looked at a law found throughout the United States that essentially criminalizes women for the violent behavior of their partner, even if they themselves were victim to that abuse. Buzzfeed found women sentenced in 11 different states to at least 10 years in prison, for failing to prevent their partners from harming their children. In certain states such as Texas, the crime is known as “injury to a child ‘by omission.’ In other states, it goes by ‘permitting child abuse’ or ‘enabling child abuse.’” They found personal stories and spoke to experts who explained the harm these laws can cause, by essentially punishing a mother for being in an abusive relationship.

While there were far too many excellent works of journalism to include in this roundup, another example of note was the Minnesota Public Radio four-part series and radio documentary on the history of hiding sexual abuse in the Catholic church. The investigation covered 30 years of history and included a detailed "source notes" section on key dates. For the complete list of winners, visit the Sigma Delta Chi Awards page.

This year’s winners covered a wide range of subjects. Through careful, detailed reporting these outlets introduced new topics (or familiar topics in a new way) that challenged readers. These articles are examples of what good investigative journalism can do: translate complex issues into understandable forms of communication that can raise awareness.