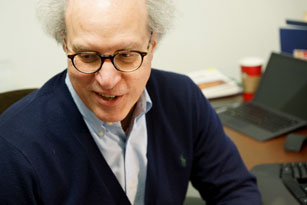 David Donald, now data editor at the Investigative Reporting Workshop, and a team at the Center for Public Integrity today received the first-place 2014 Philip Meyer Journalism Award from the National Institute for Computer-Assisted Reporting.

The Center won for "The Medicare Advantage Money Grab," by Fred Schulte, David Donald, Erin Durkin and Chris Zubak-Skees. The project revealed nearly $70 billion in “improper” Medicare payments to health plans from 2008 through 2013. The investigation exposed how federal officials missed multiple opportunities to corral overcharges and other billing errors.

The judges noted that despite the challenges of dealing with complex and voluminous government data, the Center aptly dissected the shocking shortcomings of a program that was meant to stabilize costs, but instead has allowed the industry to harvest huge sums by saying patients were sicker than they were. The explanation of the risk score system and the analysis of how it is manipulated was particularly lucid, according to the judges.

The awards are in honor of Philip Meyer, professor emeritus and former Knight Chair of Journalism at the University of North Carolina at Chapel Hill, and the Meyer Award recognizes the best uses of social science methods in journalism. Meyer is the author of Precision Journalism, the seminal 1972 book (and subsequent editions) that focused growing numbers of journalists on the idea of using social science methods to do better journalism. He pioneered the use of survey research as a reporter for Knight Ridder newspapers to explore the causes of race riots in the 1960s.

Second place was awarded to ProPublica’s "Temporary Work, Lasting Harm" by Michael Grabell, Olga Pierce, Jeff Larson and Lena Groeger, which exposed a disturbing, little-noticed trend taking hold in industrial America — major companies have turned to temporary workers to fill dangerous jobs in factories,  warehouses and processing plants, where they face a much greater risk of injury than other workers.

Third place was awarded to “Water's Edge — The crisis of rising sea levels,” by Ryan McNeill, Deborah J. Nelson and Duff Wilson of Reuters. These stories examined the continuing effects of rising seas on the United States and the country’s response to an increasingly watery world.