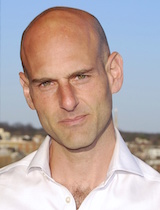 Vine, a professor at American University, has spent years documenting the growth and influence of the U.S. military worldwide. His latest book, "Base Nation: How U.S. Military Bases Abroad Harm America and the World" (Metropolitan Books/Henry Holt 2015), shows the military’s increasing footprint across Asia and Africa. The Workshop’s Kelly Martin created more than a dozen historical maps for the new book and a new set of interactive maps for the Workshop’s website. The maps highlight the official bases and the lily pads — the small, often secret “cooperative security locations,” as the military calls them — around the world, and we put a spotlight on the changes in Africa.

Vine is also the author of "Island of Shame: The Secret History of the U.S. Military Base on Diego Garcia."

The Workshop continues to look at breaking down walls within the university, where scholars and researchers such as Vine use many of the same reporting tools as journalists. You can hear more about Vine's research on NPR. He has also recently written about the growth of base nations for Politico, The Boston Globe and The New York Times.