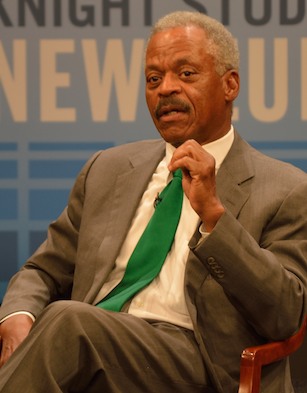 In May 1989, Shaw was among a handful of CNN journalists dispatched to Beijing to report on an upcoming summit between China’s leader, Deng Xiaoping, and Soviet chief Mikhail Gorbachev. But the CNN team, expecting to cover a summit, instead “walked into a revolution,” Shaw said.

The demands of students and intelligentsia for more democratic reforms quickly became a a “watershed story” for the then 9-year-old network, he said.

However, the Chinese government’s censorship quickly overtook CNN’s coverage, and censors pulled the plug on the network’s overseas transmissions the morning of May 20.

“I had chills going up and down my back,” Shaw said, describing his outrage as “a child of democracy.”

“They had blinded the world,” he said.

Censorship has quickly become the defining characteristic of the Tiananmen story, from the government’s silencing of local media during the protests to its denials today of any killings in the square. Online censors still block even oblique references to the massacre around the June 4 anniversary, in which hundreds, possibly thousands, of protesters were killed.

International journalists have also struggled to produce and disseminate accountability reporting under the country’s restrictive policies. After The New York Times published an article on the vast wealth of China’s premier in 2012, government censors temporarily blocked access to the publication’s website. And last year, Bloomberg News spiked or delayed investigative stories in order to preserve the organization’s reporting access in China, according to reports in the Times.

Though the Chinese government has been “100 percent successful” in controlling Chinese media through online censors and military strength, Shaw said censorship is not the only challenge to a robust press. To hold governments accountable, journalism depends in part on the “active participation” of readers and viewers, he said.

“When [news organizations] smell a rat, they should say so,” Shaw said. But he also urged the 120 audience members to be proactive and seek out objective news sources. He questioned the increasingly partisan biases of some networks, including Fox and MSNBC, and cautioned that a social-media presence does not necessarily mean “journalism is being practiced.”

“You are a consumer of news,” he told the audience. “You are constantly informing yourselves.”​