"Years of Living Dangerously," to air on Showtime in April 2014, looks at the impact of climate change around the world. The Workshop's Senior Producer, Margaret Ebrahim, has been reporting two of the stories in the eight-part series: one explores the natural-gas boom and the other is about the rise in renewable energy development.

Faculty members of the Missouri School of Journalism recognized Lewis for his "pursuit of investigative journalism that relentlessly seeks out the truth for citizens.”

Lewis traveled to Missouri to accept the award and gave a lecture on investigating power in the new journalism ecosystem. He was one of five journalists honored Tuesday.

The award committee cited Lewis’ work in creating The Center for Public Integrity, the International Consortium of Investigative Journalists and several other nonprofit investigative news organizations.

The other four journalists ...

Today we're running another in a series of stories produced by Myron Levin at the nonprofit Fair Warning website. He tells the story of Kent cigarettes, which Lorillard re-engineered in response to the health scare of the early 1950s, when the link between smoking and lung cancer began drawing wide attention. The "new" Kents 60 years ago had a patented "Micronite" filter that contained a virulent form of asbestos, and the company continues to face litigation related to those filters. In addition, the Food and Drug Administration is considering whether to restrict the use of menthol in cigarettes: Lorillard ...

"Gideon's Army" follows the personal stories of three young public defenders in the Deep South challenging the assumptions that drive a criminal justice system strained to the breaking point. The film, which won an editing award at the 2013 Sundance Festival, will be screened on Oct. 17 at American University's Katzen Arts Center, 4440 Massachusetts Ave. NW, in Washington, D.C.

The program, which is free and open to the public, runs from 5:30 to 8 p.m. and includes a Q&A with the director, Dawn Porter, and experts in the field of the indigent defense ...

"Hunting the Nightmare Bacteria," a new PBS FRONTLINE program, co-produced by the Investigative Reporting Workshop, looks at whether the golden age of antibiotics is coming to an end. From a young girl thrust onto life support in Arizona to an uncontrollable outbreak at one of the nation’s most prestigious hospitals, FRONTLINE investigates the alarming rise of a deadly type of bacteria that our modern antibiotics can’t stop.The program airs nationwide Oct. 22 on PBS. See a preview here.

"Big Sky, Big Money," a 2012 PBS FRONTLINE documentary produced in association with the Investigative Reporting Workshop, won an Emmy at the 34th Annual News and Documentary Emmy Awards presented at a ceremony in the Time Warner Center in New York City Oct. 1.

The program, about money and politics in Montana, won for Outstanding Long-Form Investigative Journalism. It was produced and directed by Rick Young; additional producers were Megan Larson and Anthony Szulc.

More stories and the work of Marketplace reporters who collaborated on the project can be found on the Workshop's site. 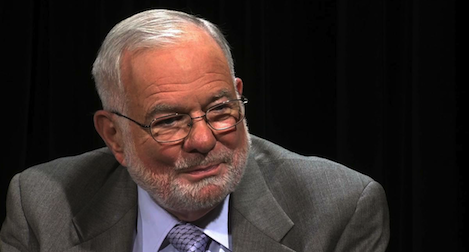 Jouranlist George Lardner talks about his coverage of the Kennedy assassination.

Executive Editor Charles Lewis and the Investigative Reporting Workshop, the Fund for Independence in Journalism and the Center for Public Integrity jointly released Investigating Power last year. This online multimedia presentation honors independent journalism in America, with career timelines, video excerpts and significant “truth to power” moments in contemporary U.S. history since 1950, including the recollections of 23 journalists who made significant contributions to the nation's understanding of key issues, including McCarthyism, civil rights, Watergate and the Vietnam and the post-9/11 Afghanistan and Iraq ...