Reporting the aftermath of a crisis: journalism and accountability in Bangladesh

With the death toll recently passing 1,127, the April 24th Rana Plaza factory collapse is now one of the largest industrial accidents in modern history. The factory employed thousands of garment workers and supplied several international firms operating within the country’s multibillion-dollar garment industry. The accident was the largest of more than 40 such accidents occurring over the past year in overcrowded factories across the country.

Since the tragedy, two engineers, a factory owner and the city’s mayor have been implicated on negligence charges. Under fire for profiting from the country's low wages and scant regulation, several international firms have signed a legally binding agreement to help finance safety upgrades within the factories, and at least one firm has pledged to pull out of the country. However, Bangladeshi journalists meeting in Washington on May 8 said that the problem is more systemic.

“This is not the single fault of private companies, nor of a single building owner,” said Miraj Chowdhury of Maasranga Television. “It is a cumulative greed that killed this many people. Everything must be looked at, 360 degrees.” 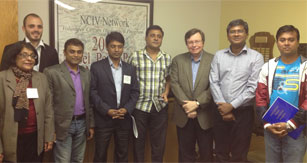 The journalists, touring the United States on a State Department-sponsored visit, met with the Investigative Reporting Workshop’s executive editor, Charles Lewis. They had been tracking the story remotely and found it difficult to be away from events at home.

They implored local and international media to take a broader look at the social issues surrounding the collapse, and focus on understanding the social, political and economic factors that led to the accident. Chowdhury said that the reaction from international media has been one of shock and sadness, with initial reports tallying death figures and establishing blame. However, he said that media should take a comprehensive look at all of the institutions to fully understand the problem.

“The social context, greed factor of Western buyers, owners and corrupt officials needs to be scrutinized carefully,” said Chowdhury. “International media need to dig deep and follow up continuously so that the issue will not be forgotten. Objective reporting can create pressure for a bigger change... If we miss this moment, it will be lost forever.”

Given the potential for government corruption in allowing factory owners to shirk safety regulations, the journalists said that comprehensive investigative reporting is critical for holding government and private institutions accountable.

“There are things we can do besides simple reporting ,” said Mir Masruruzzaman, a television news correspondent from Dhaka. “We must keep the pressure on all corners, in relation to the government, to business, to any people who give these permissions to set up a building or a factory.”

Lewis agreed. “It all comes down to global accountability, and for journalists, the lens has to be wider,” he said. “It comes down to journalists looking at the whole world and not just their own town or village or country. I think we’re at a very fluid, dynamic place in time.”