This week "Years of Living Dangerously" Producer Mishi Ebrahim and and I traveled to North Carolina to meet with Joel Olsen, a local solar developer. Olsen, a North Carolina native, created O2Energies in 2009 to tap into the emerging solar industry in the state. He built one of his first solar projects in the small town of Mount Airy, the birthplace of Andy Griffith and the inspiration for the fictional town of Mayberry for "The Andy Griffith Show," a CBS sitcom that ran from 1960-1968. Olsen said the location of the Mayberry Farm was symbolic, to show that "America's hometown" was looking forward in its energy use. 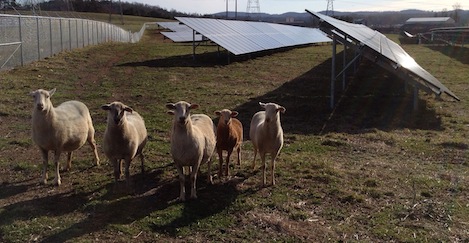 Sheep graze under and around solar panels, keeping the grass trim at the Ararat Farm, which was completed in the fall of 2012. This is O2Energies' second solar farm in Mount Airy, N.C.; the first was Mayberry Farm.

North Carolina ranks fifth in the nation for the amount of solar capacity installed last year, according to the Solar Energy Industries Association. Solar developers, including Olsen, credit the state's clean energy standards as a reason for the solar industry's success in the state.

In North Carolina, utilities are required to purchase some of their electricity from renewable sources. A bill in the state legislature would weaken this renewable requirement. Solar and other renewable developers have been trying to convince lawmakers to preserve the clean energy mandate.  In the coming weeks, we'll travel to North Carolina to cover hearings on the bill.