I first met Mike in 1984, when he called me out of the blue one day and asked if I had any interest in working for "60 Minutes." I had been an off-air investigative reporter at ABC News in Washington for more than six years, and I was restless. Within weeks, I had quit my job and moved my wife and daughter to the New York area. I worked as a producer for Mike Wallace at "60 Minutes" for roughly five very exciting and very difficult years, before quitting abruptly in late 1988. Why I broke a four-year contract and left — and how and why I later started the Center for Public Integrity — is a story for another day.

But my favorite investigative exposé with Mike at "60 Minutes" — and there were many great, poignant moments in which the powerful wilted under the lights and his fearless, tenacious questions — was actually my last piece as an associate producer to him, working closely with Lowell Bergman, eight years older than me, who I had met and worked with at ABC back in 1979. I proposed that we produce an investigative segment about a corrupt public school superintendent in Appalachia. 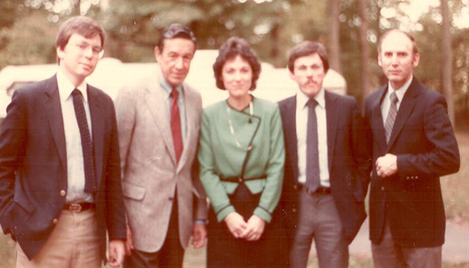 From left: Charles Lewis and Mike Wallace with local residents Martha Marcum, Elmer Heist and Ernest Harris during an interview in Albany, Ky., in 1984.

In developing the school superintendent story, first broken by Richard Whitt of the Louisville Courier-Journal, about the “czar of Clinton County,” I became more sensitive to the physical environs and my own conspicuous presence on the ground there. Robert Polston, with 23 of his relatives on the public payroll and already under investigation by the FBI and the U.S. Department of Education, ruled over perhaps the worst school system in America. It was the lowest-ranked school system in Kentucky, which itself was ranked dead last among all 50 states. There, in the then second-poorest county in the nation, I was followed wherever I drove, and I once met some brave citizens behind a cemetery after midnight, carefully parking my rental car with out-of-town (Jefferson County- Louisville) license plates far away. These nervous whistleblowers were justifiably quite worried about losing their jobs or worse, one of them actually offering me a “piece,” which I quickly realized was a handgun (nothing gets by me). I politely declined, joking that I would probably “shoot my foot off” with it. All the while we talked, a car recognizable to them kept circling the area, seeking to learn where I had gone and with whom I was talking. My indelibly etched memory of this town is that the trees and houses almost seemed to have eyes, especially after dark.

Weeks later, on the eve of filming the story with two camera crews and producer Lowell Bergman and Mike Wallace, we were at our motel, 20 miles away in an adjacent county, eating dinner together, when we were interrupted and invited to a large room in the back of the restaurant, filled with at least two dozen citizens of Clinton County. They had heard "'60 Minutes" is in town, and had driven over to secretly tell us about the conditions they had been living through.

None of these were people I had ever met or interviewed. Some of them broke down and cried. We heard harrowing stories of sexual assault, of arson against people “not with the program,” of federal money for handicapped children never being spent for that purpose, their parents told to keep them at home because there was simply no money to teach them. It was almost indescribable, and, of course, it made a huge impression on Mike, who had just arrived on the scene. Later that night, after we had begun to settle into our motel rooms, we were visited and urged by the Kentucky State Police to leave the area immediately because they said they had received an explicit death threat made against us.

Leaving, though, was out of question to us, and, indeed, the next day at the last school board meeting before the November elections, we let the cameras roll. When confronted by Mike with the questions I had written — what about those 23 relatives on the payroll; do any of these board members ever disagree with you; what about those handicapped children — Polston’s perspiring face turned red, and he literally started chewing his tie while talking. Mike’s piercing public questions (Polston had weeks earlier declined our request for an on-air interview) seemed to embolden some of the citizens to confront Polston directly, all of which we recorded.

Because of the resultant nationwide attention and embarrassment caused by our story — starkly exposing very credible allegations of misappropriation of funds, forgery of government documents, voter fraud and payroll padding — within days Superintendent Robert Polston was removed from his position by the Kentucky governor. It remains the most personally gratifying and inspiring investigative story I’ve ever worked on, because not only were we shining a light on rampant, outrageous corruption, but we also were directly helping the people who had been personally victimized for many years.

What is stunning today is that the viewership of "60 Minutes" during those years was as high as 40 million Americans, and the fact that Mike Wallace did hundreds of segments in his long career, scores of them of that investigative ilk.

Days after our time filming that story in southern Kentucky, Mike began going every day to the Westmoreland v. CBS trial courtroom. While Gen. William Westmoreland eventually withdrew his libel lawsuit against the network for its "CBS Reports" documentary about the Vietnam War, the experience was searing for Mike, who also tried to oversee scripts and cut pieces in the evenings and weekends. After months of that kind of stress and exhaustion, he suffered a nervous breakdown and even attempted suicide. But soon, with the help of medication and the excitement of his work, he was back in the saddle, traveling nonstop, his presence as forceful and indelible as ever.

Mike and I stayed in touch over the years after I left "60 Minutes," and in January 2008, a few months before he turned 90, he kindly agreed to sit down and allow me to interview him in New York for an online, multimedia production (and eventual documentary) called Investigating Power, which will be presented publicly for the first time on April 25, online and at the National Press Club. The project documents “truth to power” moments in contemporary U.S. history and the journalists behind them.

In our interview, Mike, not surprisingly, was becoming forgetful and was not as razor sharp as he had been decades earlier, but, nonetheless, much of what he said was still very insightful. And in light of his passing, I am releasing two video vignettes from our two-hour conversation — one about his friendship with Richard Nixon, the other about his world exclusive interview during the U.S. Embassy hostage crisis with Iran’s Ayatollah Khomeini in 1979.

Part of Mike Wallace’s legacy is the Knight-Wallace Fellows program at the University of Michigan, generously supported by Mike and Mary Wallace for many years and ably directed for three decades by veteran journalist Charles Eisendrath. Every year 15 to 20 Knight-Wallace Fellows decompress and commiserate in the Wallace House before returning to the journalistic trenches.

Mike and his stellar team of producers won 21 Emmy Awards, and according to CBS, he (and they) received five DuPont-Columbia journalism and five Peabody Awards. In June of 1991, he was inducted into the Television Academy Hall of Fame. He won the Paul White Award in 1993, the highest honor given by the Radio and Television News Directors Association. And he won the Robert F. Kennedy Journalism Award grand prize in 1996. See The New York Times’ fine coverage today of his remarkable life, in text and video.

Mike Wallace will go down in history as the finest on-air investigative interviewer on the most popular and most honored network television news program in U.S. history. At "60 Minutes," he set the gold standard for gutsy, "tough but fair," go-for-the-jugular questioning, and he showed the world and the profession how investigative television news could look, should look.

Despite our serious professional and personal differences, what I learned from Mike was and remains incalculable. And every producer who worked with him knew that, while it might be an excruciating journey, the final product would be superb, because when you got back to the editing room, you almost always would have great material to work with, thanks to his strong presence and adroit interview style.

It was an honor and a privilege to know and to work with him.