Americans are being exposed to more medical radiation than ever, however, no one is tracking the amount of radiation individual patients receive. Unlike medication information, radiation dose from diagnostic imaging is not part of a patient’s medical record. The National Institutes of Health plans to implement a new program to change that. The Clinical Center is poised to become the first facility in the country to purchase equipment that automatically records a patient’s radiation dose exposure and log it into an electronic medical record. Going forward, the Clinical Center will not purchase equipment without such capabilities. The new ...

The race for West Virginia's Third Congressional District is heating up, and my Blown Away stories have suddenly resurfaced in the latest round of back-and-forth between the campaigns.

Politico reported today that Republican nominee Spike Maynard has released a new political ad targeting the long-time incumbent, Democrat Rep. Nick Rahall on the issue of stimulus money for renewable energy creating jobs in China. The ad, which you can see below, claims that, "as part of the Obama-Pelosi team, Rahall voted for billions in tax breaks for foreign companies creating Chinese jobs. Rahall's vote helped foreign companies create jobs ...

Come and knock on our door

It's been a few short years since the concept for the Investigative Reporting Workshop originated over a series of coffee and lunch meetings. Since then, the idea has grown to a reality that now includes offices on New Mexico Avenue and a staff of 20-plus strong investigative reporters and editors.

In that time, we've launched nine in-depth investigations ranging from nuclear energy's big lobbying push and green energy stimulus funds going overseas to an analysis of financial statements from every bank in the country and the political influence of media and broadband companies. 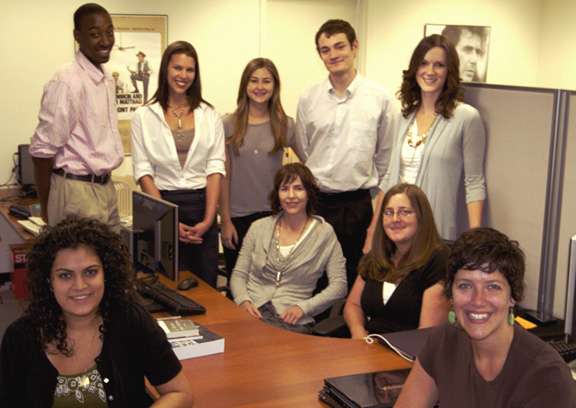 As the journalistic landscape continues to shift, journalists themselve are taking charge, with new businesses and models.

And journalism schools continue to experiment with their offerings and curriculum in response. Earlier today, City University of New York announced it will establish the Tow-Knight Center for Entrepreneurial Journalism with two $3 million grants from the Tow and Knight foundations.

Jeff Jarvis, CUNY associate professor and director of the new center, wrote in his blog that the grants will help establish the country's first master's degree in entrepreneurial journalism, continue research in new business models for news and help to ...

This post has been updated to correct the number of banks that have failed so far this year.

We have posted the second quarter banking data on our BankTracker site.

Here's what they show:

--The nation's banks had their best quarter in more than two years, according to their reports to the Federal Deposit Insurance Corp. But the woes brought on by the financial crisis will still take a long time to repair, as the number of banks on the government "problem list" continues to grow.

-- The amount of troubled assets on bank's books declined for the ...

The theme is crowdsourcing

For all that's been said about the impending doom of the Internet's impact on journalism, today's Knight-Batten awrds luncheon at the Newseum was an example of all the good — no, great — that has come from online innovation.

The awards recognize the best efforts to encourage public participation in the news-gathering process, and this year's winners were the best of the best in crowdsourcing and open government.