With each successive generation, the apple fell further from the journalism tree. The original publishers’ vision and drive to achieve a greater good, to serve their communities by providing vital daily information to citizens, beyond the mere profit motive, became less familiar and less shared over time by hundreds of offspring shareholder descendants with generally little personal interest in the news business. Today the Graham and the Sulzberger families are valiantly hanging on to The Washington Post and The New York Times, respectively, and of course I wish them every success in doing so.

But other publishers and their immediate families have chosen a different way, consciously designed to preserve what they had established – their newspapers but also their journalistic quality, values and commitment to serve their communities – long after they were gone. I participated recently (Sept. 13) in a symposium at the University of Oxford Reuters Institute for the Study of Journalism in England about the fascinating and little understood subject of "Charitable and Trust Ownership of News Organizations." It was organized and led by Dr. David Levy, director of the Reuters Institute, and Dr. Robert Picard, author of 25 books and one of the foremost authorities on media economics in the world. 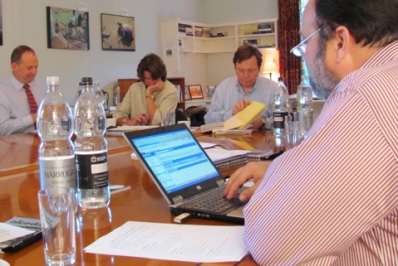 Folks from four countries on two continents spoke about the histories of their unusual enterprises: Maleiha Malik, a director on the board of the Scott Trust, which owns the Guardian newspaper in England; Jeanne-Emmanuelle Hutin-Gapsys, of Ouest-France, the largest-selling newspaper in France, which is owned by Groupe Ouest-France; John Honderich, chair of the Board of Torstar Corporation and the Voting Trust of five families whose ancestors owned and managed the Toronto Star, the Canadian newspaper that once employed Ernest Hemingway; and Dr. Karen Dunlap, president of the Poynter Institute, which owns the for-profit St. Petersburg Times.

In these cases, visionary publishers or their children – Nelson Poynter, CP Scott and John Scott, J.E. Atkinson and his son Joseph – established respected newspapers but also created legal trusts to administer them and preserve their bedrock values many decades (so far) after their deaths. For nearly 40 years, Nelson Poynter was the publisher of the St. Petersburg Times. Before he died in 1978, he did something almost unimaginable to most newspaper publishers — in order to ensure the "continued independence" of his newspaper, he willed his millions of dollars in controlling stock of the Times Publishing Co. to the school he had earlier created, the Modern Media Institute, which was later renamed the Poynter Institute after his death. According to its website, the Institute is "a nonprofit teaching and research institution charged with serving journalism and the academic world." It also owns the St. Petersburg Times.

In Canada, Atkinson of the Toronto Star left behind very strongly held values which have become known as the Atkinson Principles, which guide the operations of the newspaper to this day: "Ultimate responsibility for observing and promoting the Atkinson Principles is vested in the Voting Trust and the Torstar Board of Directors (and its Editorial Advisory Committee)." Those Principles were never formally codified by Atkinson himself, but they are well understood half a century after his death and summarized as: a strong, united and independent Canada; social justice; individual and civil liberties; community and civic engagement, the rights of working people and the necessary role of government.

Against this extraordinary backdrop, I was asked to speak about the notably different, other end of the spectrum subject of starting and sustaining a nonprofit organization, and I reviewed the history since the 1970s of nonprofit investigative journalism in the U.S. and around the world, specifically describing the history of the 501 (c)(3) tax exempt Center for Public Integrity, which I founded in 1989 and led until 2005, as well as this university-based organization, the Investigative Reporting Workshop, which began in mid-2008. I described the plethora of new nonprofit news publishers throughout the U.S., including the unprecedented founding in 2009 of the Investigative News Network, on whose Board I serve and which now consists of 40 nonprofit member journalism organizations and climbing.

What do all of these organizations, old and not so old, have in common? John Honderich summed it up best on day two of our wonderful conversation: an unwavering commitment to strong journalistic values as their fundamental raison d’etre.

All of this rumination will become a Reuters Institute book in 2011, which will be an important contribution to what relatively little is known about this very important subject.