Bridging the Fourth and Fifth estates

Last week when I found about the Poynter Institute event at the Newseum, “Fact or Friction: Building the Bridge Between the Fourth and Fifth Estates,” my first thought was “We have a Fifth Estate?”

Today, news leaders (from both the Fourth and Fifth estates) gathered to talk about the evolution of news: how it’s consumed, how it’s produced and how it’s disseminated.

The goal of serving the public good motivates both estates.

It was evident in the panel with GroundReport’s Rachel Sterne, who said, “Transparency trumps objectivity.”

Sterne founded GroundReport in 2006 as a world news platform that combines digital reporting tools and a selective reporter network of more than 5,000 contributors (who are vetted). These on-the-ground reporters provide local perspectives on global news. 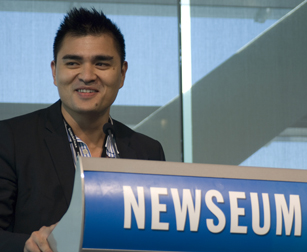 Jose Antonio Vargas of the Huffinton Post, speaks about the Fourth and Fifth estates at an event sponspored by the Poynter Institute.

As examples of the success she has achieved as a member of the Fifth Estate, Sterne pointed to GroundReport’s 2008 partnership with PBS and YouTube's “Video Your Vote” project, which collected personal video reports from voters across the country.

Fellow panelist Jose Antonio Vargas, senior contributing editor of the Huffington Post, pointed to last summer’s Twitter and Facebook posts coming from Iran as providing the most comprehensive coverage of what was happening.

“Online, we become each other’s witnesses,” he said.

Aside from the successes of the Fifth Estate and how citizens have captured news as it happens (Miracle on the Hudson, Mumbai Attacks, and Iranian Revolution), the question still remains as to how these ventures are funded and how they are paying contributors.

Sterne explained that GroundReport contributors are paid a portion of ad revenue based on page views. The higher the page views, the more money the contributor will earn.

While Sterne didn't share specifics, she did note that the amount of money going to contributors is not enough to sustain a Western journalist. But the pay is usually enough in the Eastern world, she said.

In addition to ad revenue, GroundReport also earns revenue by partnering with various syndication organizations, including YouTube, PBS and Huffington Post. In a 2008 piece with Bloomberg’s Businessweek, Sterne said the company earned $75,000 in revenue in 2008 and would bring in $225,000 in 2009.

Vargas, on the other hand — who wasn’t sure if the Huffington Post really falls in the Fourth or the Fifth Estate category — said they derive the majority of their revenue from advertising.

A May piece on the BusinessInsider.com noted that the Huffington Post earned about $15 million in revenue in 2009. The company's sales boss, Greg Coleman, said, "The company can double revenue this year to $30 million, and double it again next year to $60 million.”

But Vargas said the company does not pay its bloggers. Huffington Post publishes hundreds of unique blogs, and Vargas said the value to the blogger is that he or she is given a platform to do that.