Some people apparently didn't get the FOIA memo

Maybe it’s time for the Obama administration to resend its Freedom of Information policy and guidance to federal agencies, based on some of the FOIA-related items that have crossed the desk in recent days. It sure seems like a lot of FOIA folks missed the message.

Category 1: We don’t know whether to laugh or cry. Andrew Medici, a reporter for Federal Times, writes about his experience with FOIA at the Department of Homeland Security. Remember, this is a reporter who works for a publication that covers the federal government, one that’s not exactly known for being hostile to bureaucrats. Last spring Medici was trying to get in touch with DHS public affairs officers but kept being referred to an anonymous email address. Frustrated, he decided to file a FOIA request for the names and contact information for the DHS flaks. Here is what he got: 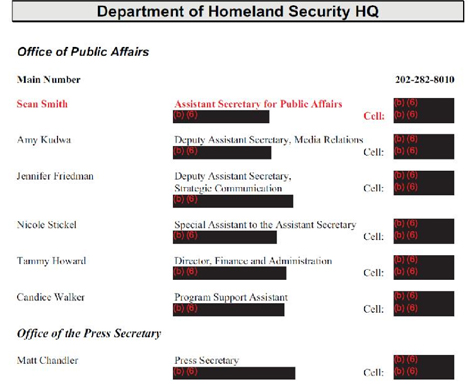 All the email addresses and phone numbers were redacted, with DHS FOIA citing exemption 6, which protects items that could create “an unwarranted invasion of personal privacy.” Yes, it certainly is probably annoying for PR people to have to answer telephone calls. Once upon a time, we recall, press agents wanted you to get in touch with them. Read the Federal Times story.

Category 2: At least he got their names. The Electronic Frontier Foundation, which worries a lot about privacy and other issues, noted that the White House hadn’t announced any nominations for the relatively obscure Intelligence Oversight Board.

The group filed a FOIA request “for membership, vacancies and other information about the IOB” and received — OK, nothing.

So now the foundation has filed a lawsuit against the Office of the Director of National Intelligence, seeking the information. Here is the news release about the suit.

Category 3: A lot of people are suing over FOIA. The FOIA Project at Syracuse University reported this week that 378 lawsuits were filed against federal agencies in the 12 months that ended Sept. 30. That’s a 27 percent increase in just one year. The full report is here.

Just a reminder: It wasn’t supposed to be this way. On his first day in office, the president told agency heads: “The Freedom of Information Act should be administered with a clear presumption: In the face of doubt, openness prevails. The Government should not keep information confidential merely because public officials might be embarrassed by disclosure, because errors and failures might be revealed, or because of speculative or abstract fears. Nondisclosure should never be based on an effort to protect the personal interests of Government officials at the expense of those they are supposed to serve. In responding to requests under the FOIA, executive branch agencies should act promptly and in a spirit of cooperation, recognizing that such agencies are servants of the public.”

And Attorney General Eric Holder followed that up in March 2009 by telling agencies that they should even go beyond the law and release information, and that the administration would support agencies that withheld information “Only if (1) the agency reasonably foresees that disclosure would harm an interest protected by one of the statutory exemptions, or (2) disclosure is prohibited by law.”

No, government is not too open

March 13-19 was Sunshine Week — a nationwide celebration of access to public information. Across the country, the week was marked by panel discussions, workshops and other events about using and understanding the latest developments in freedom-of-information resources. One of those was an event at the University of Missouri in which Charles Lewis, the Workshop's executive editor, argued that government has not become too transparent.

Since 1996 the Reporters Committee for Freedom of the Press has offered a free letter-generating service to provide users with the correct language and structure for FOIA requests. Over the past year the committee looked for ways to expand this tool to better serve reporters. In recognition of the fact that a single investigation can require hundreds of FOIA requests, they sought to make it easier for journalists to track and organize records requests.

“Reporters are always trying to remember where they’ve submitted requests, how much time has passed since they made the request and who they need to follow up with,” said Emily Grannis of the new ifOIA website.

Scholars and watchdog groups say the federal government — and the Supreme Court — have slowly expanded privacy rights beyond the guidelines established in FOIA. Supreme Court decisions in five FOIA cases shed light on how the government came to value privacy interests over the public’s right to know.